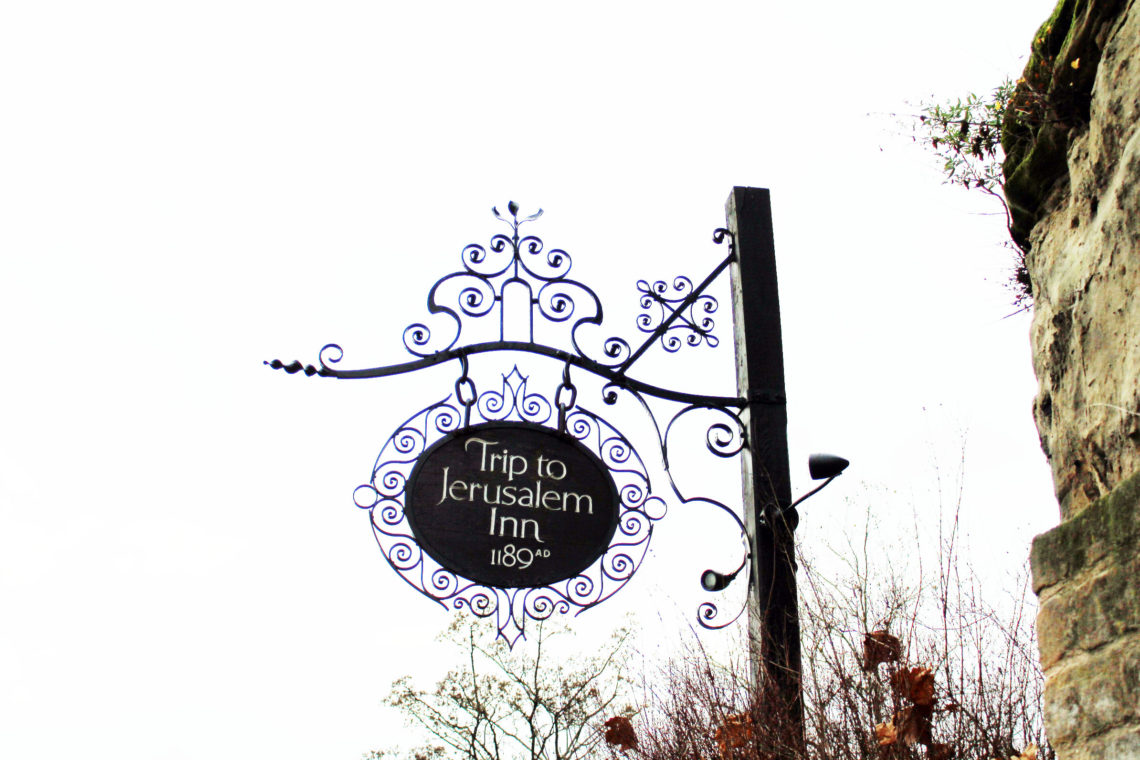 What will you do with 7 hours for a day trip in Nottingham? Is that enough to cover everything the city’s got to offer?

I got dropped off at Broadmarsh bus station in Nottingham on an unexpectedly freezing Saturday morning with 7 hours to spare. It’s the beginning of December with dark skies and a widespread lethargic atmosphere. Now this is going to be a boring blog post about my day trip in Nottingham. Nonetheless, if you want to find out just a bit more about how it’s like to travel to Nottingham in December, what Robin Hood has to do with this city and why a day trip in Nottingham might be a bad idea, feel free to read on. At least my photos (I think) look great! 🙂

Nottingham welcomed me with a damp chill in the air as soon as I got off the bus. Picking up a city map at the bus station, I started navigating my way out to explore the city.

It was an easy 10-minute walk for me from Broadmarsh bus station to the first attraction in Nottingham – Ye Olde Trip to Jerusalem, which is claimed to be the oldest pub in England. Dated back to 1189 AD, the pub is said to be connected to the caves of the Castle Rock as a brewhouse to the Nottingham Castle in the old days. Arriving at Ye Olde Trip to Jerusalem at around 10.30am, I sadly did not have the chance to venture inside as the pub would open from 11. Nonetheless, its ancient ambience was felt already from the outside. 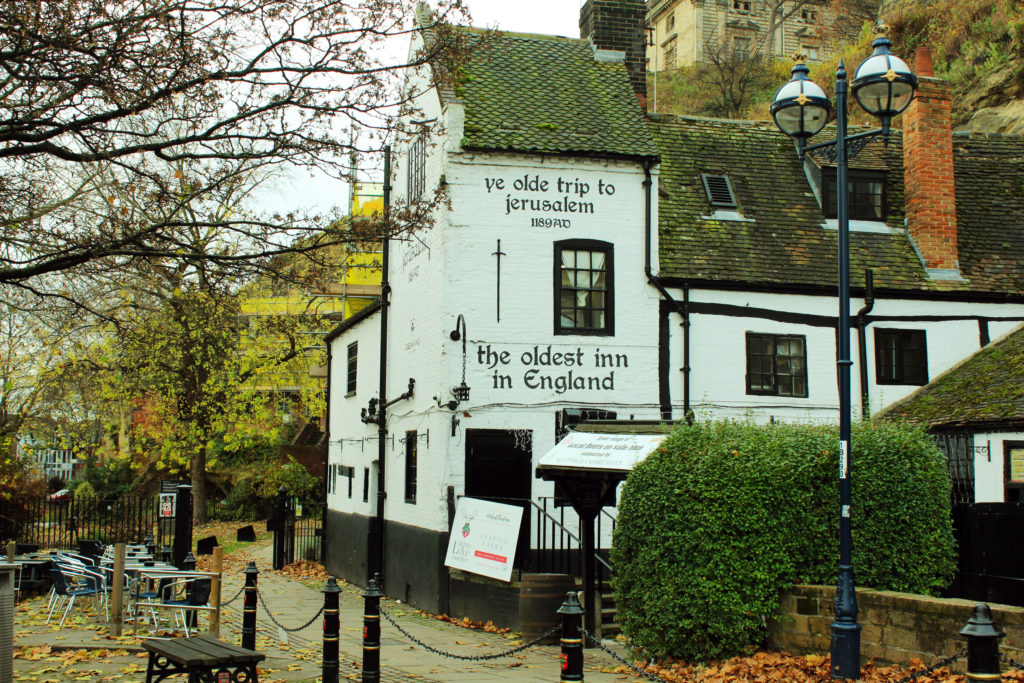 Ye Olde Trip to Jerusalem was dated back to 1189 AD

Right next to Ye Olde Trip to Jerusalem lies the imposing Nottingham Castle. This outstanding castle as we see nowadays is actually a rebuilt of the original mansion which was destroyed in the early 19th century. The Nottingham Castle now hosts a museum, an art gallery and also a cave tour for curious tourists from around the world. Entrance fee is £7 for adult and £5 concession (student discount yay!). 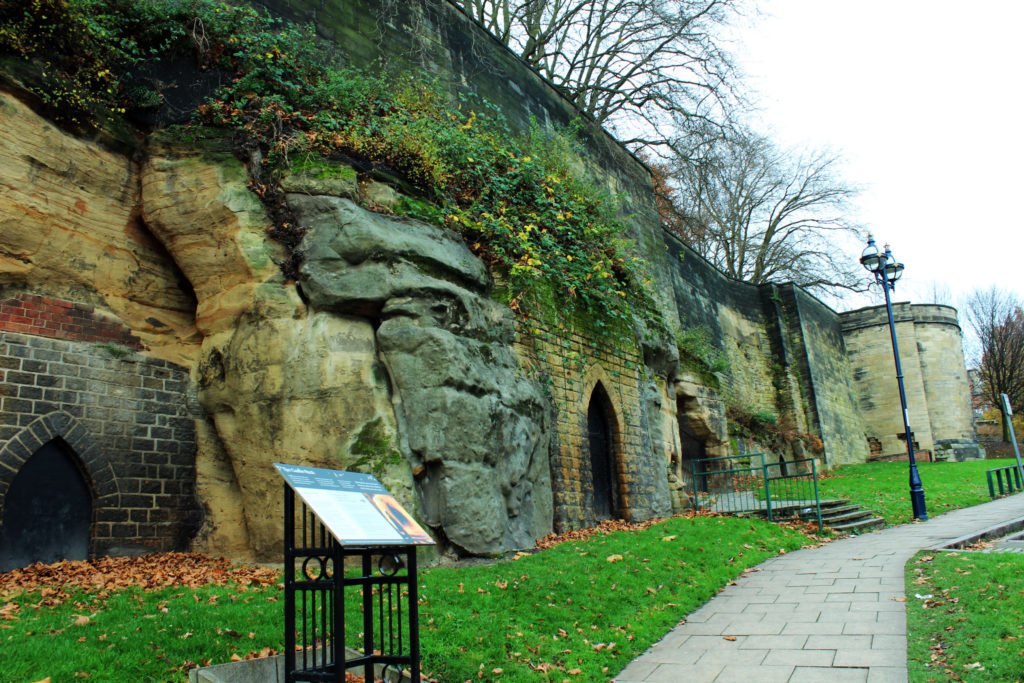 Castle Rock – Outside of Nottingham Castle

Situated right besides the Castle Rock is a must-see for all visitors to Nottingham: the Statue of Robin Hood aiming his arrow! Robin Hood as depicted by the statue looked strong and powerful. His eyes looked focused, sharp and determined. Although there have been inconsistent opinions about Robin Hood’s characteristics, the statue surely gives us the impression of a forceful, tough and strong-willed figure.

the legend of robin hood

Robin Hood’s legend is directly connected with the Nottinghamshire region. This is why Robin Hood is regarded as one of Nottingham city’s symbols nowadays. According to the legend, Robin Hood was an outlaw in the late medieval period who robbed from the rich and provided for the poor. In contrast, the major villain who encountered Robin Hood and challenged his outlaw status was the Sheriff of Nottingham. Robin Hood’s exceptional archery and swordsmanship were notable skills that accompanied his status of “hero” as regarded by many. 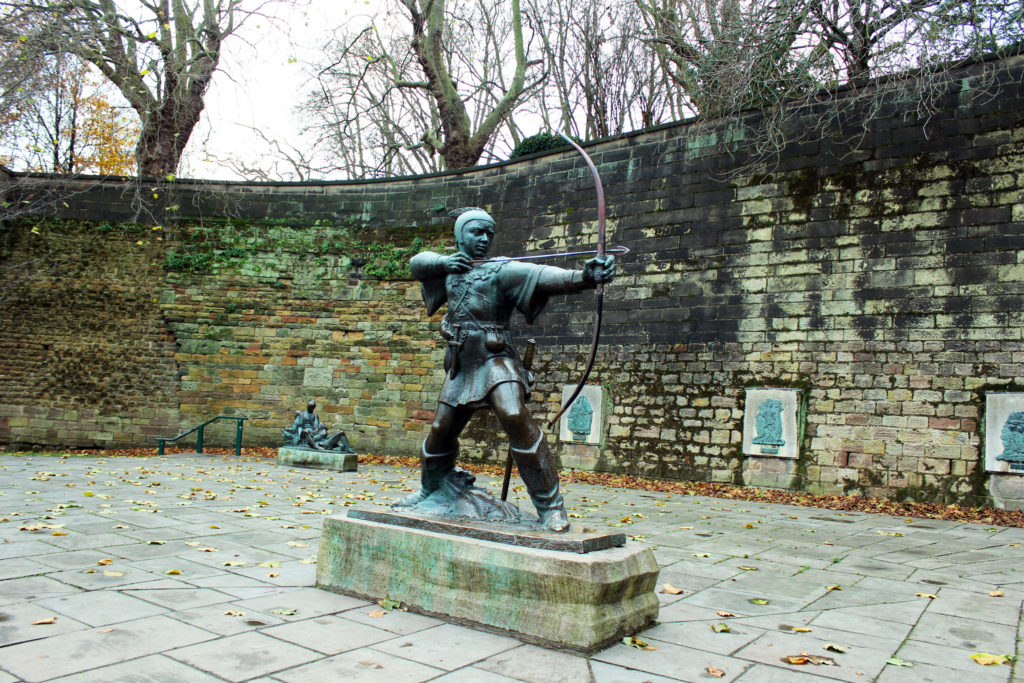 Statue of Robin Hood in front of Nottingham Castle 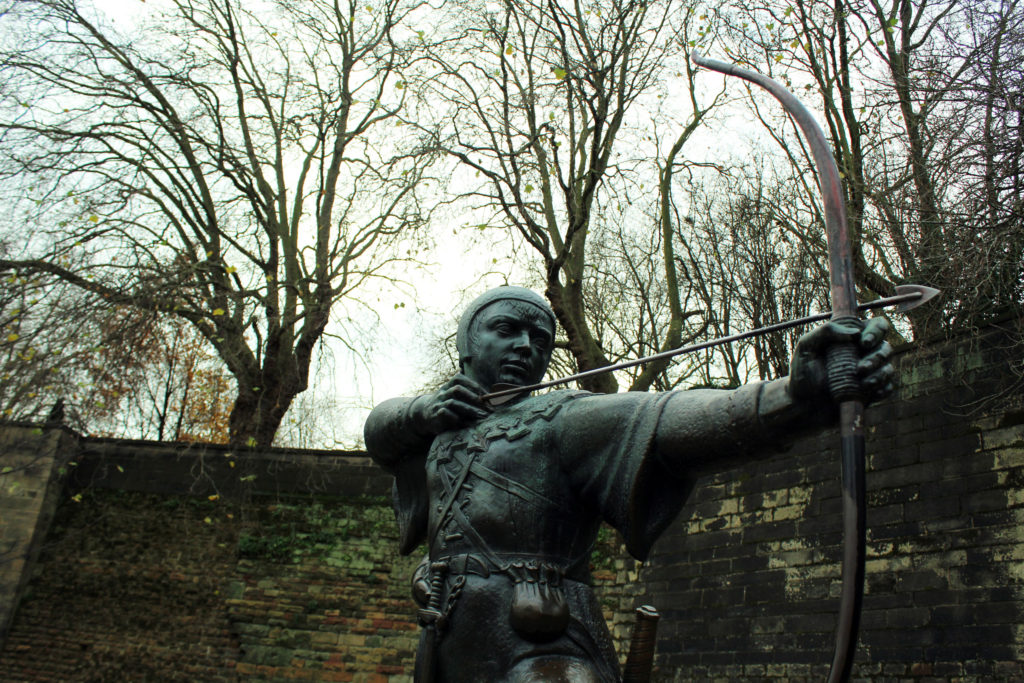 From the Robin Hood Statue, I walked for 10 more minutes to the Old Market Square, where a bustling Christmas market took place. The atmosphere was overwhelmingly Christmassy with a carol, an outdoor skating rink and a glittering merry-go-round full of smiley children. Stalls at the Christmas market offered a wide variety of mouth-watering food ranging from berry-sourced burgers to chocolate-mixed fruits. Of course, most of them were overpriced. I found a Finnish stall offering traditional Finnish food such as dried berries, meatballs and cinnamon buns as well. Amazing! 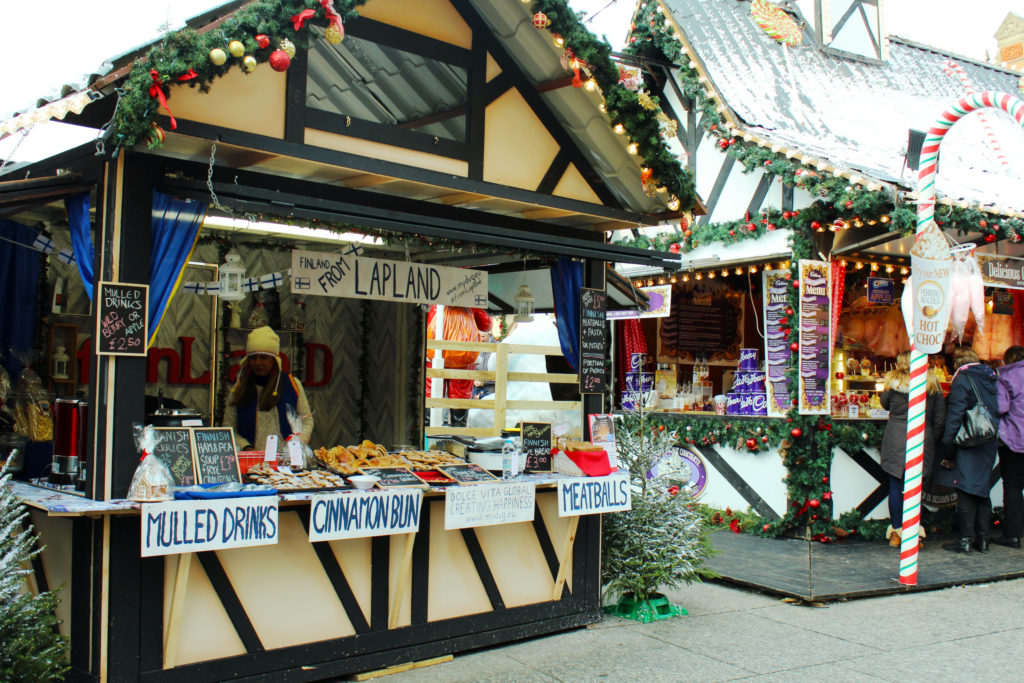 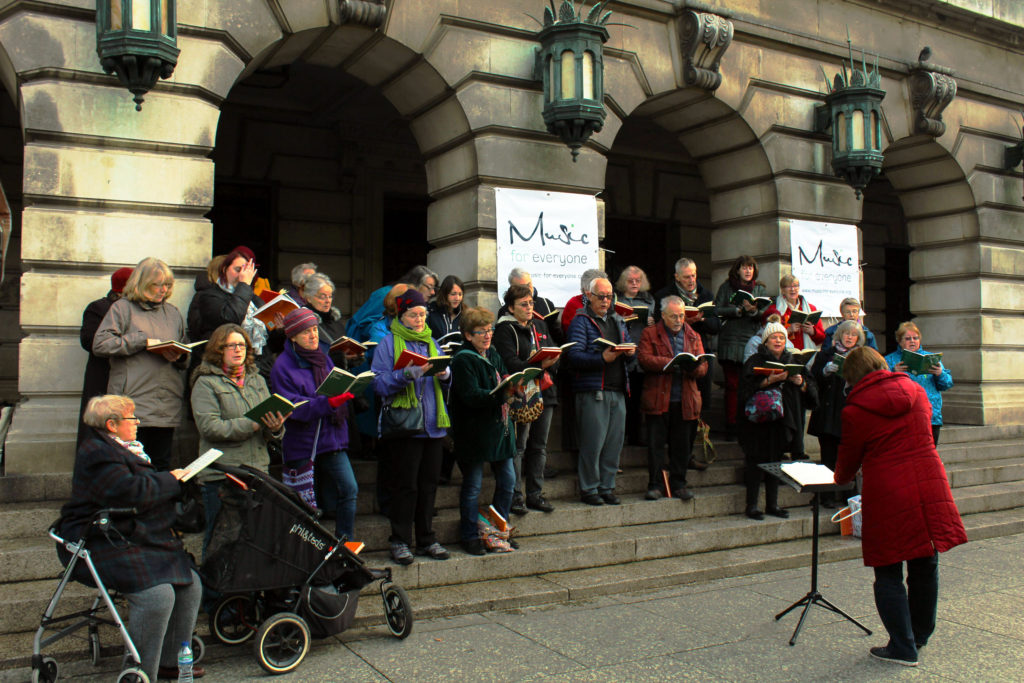 The Tourist Centre is situated right in this Old Market Square as well. You can easily drop by to pick up a map or ask for some useful travel advice.

After roaming around the Christmas market aimlessly just to end up buying an overpriced pulled pork BBQ burger (£4.5 for a pulled pork burger on which you have to pour the sauce from a BBQ bottle by yourself), I rushed to the Victoria Bus Station to catch the bus to Sherwood Forest, where Robin Hood and his merry men once dwelt and robbed from passers-by.

The trip from Nottingham to Sherwood Forest should take approximately 1 hour by the Sherwood Arrow bus. This bus departs daily from Bay 9 at Victoria Bus Station. The problem is that on Saturday this bus runs every hour. This means if I miss it, I’ll have to wait for another hour to catch the next one. The problem becomes more serious at this time of the year when the sun sets already from 4pm, as it’s not a good idea to venture into the forest in darkness. This also means that I will have to spend either one hour (too short) or 2 hours (but I only have 7 hours in total!) in Sherwood Forest before catching the bus back to Nottingham. With hindsight, I shouldn’t have chosen to make my visit on a Saturday.

what to see in sherwood forest

The limited time and the cold weather really had a bearing on my enjoyment at Sherwood Forest. It takes roughly 20-30 minutes to walk to the Major Oak where Robin Hood is believed to have hidden during his time here. With only one hour here to spare, I sadly could not manage to walk there. The forest itself appeared quite sacred, especially during this winter time. Dozens of oaks dating back to hundreds of years stood strong like soldiers guarding the old spirits of the forest. Whether or not you believe in the Robin Hood legend, these oaks can tell you the truth. Because after all this time, they have born witness to even the smallest secrets in this forest. In addition to its historical value, Sherwood forest is also a great place to explore for those who have an interest in biology and geography. 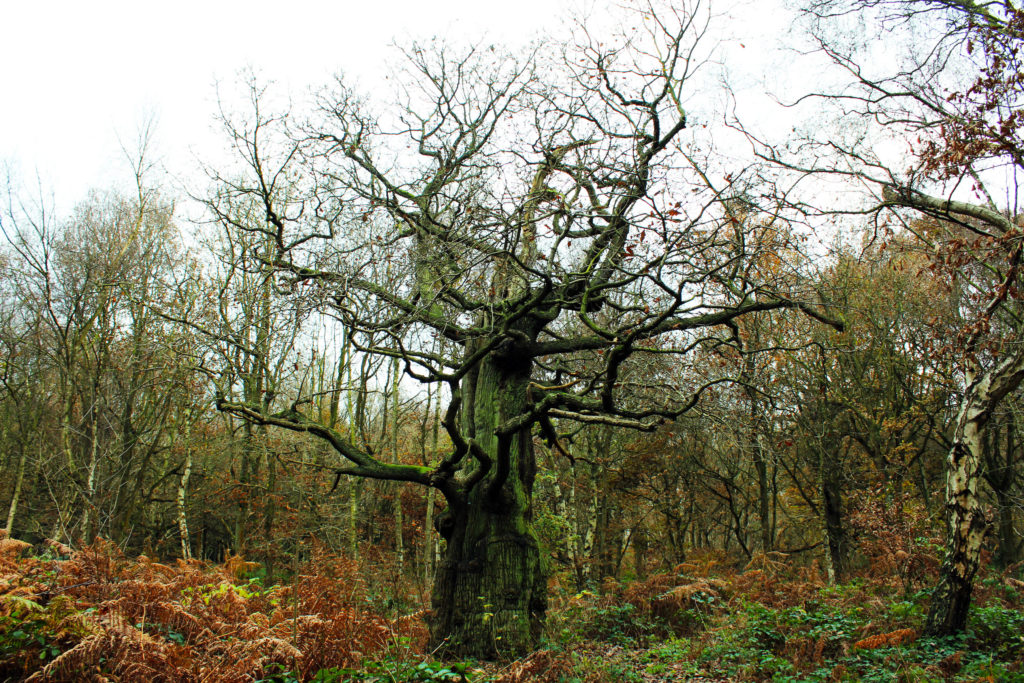 One of the amazing oaks in the Sherwood Forest 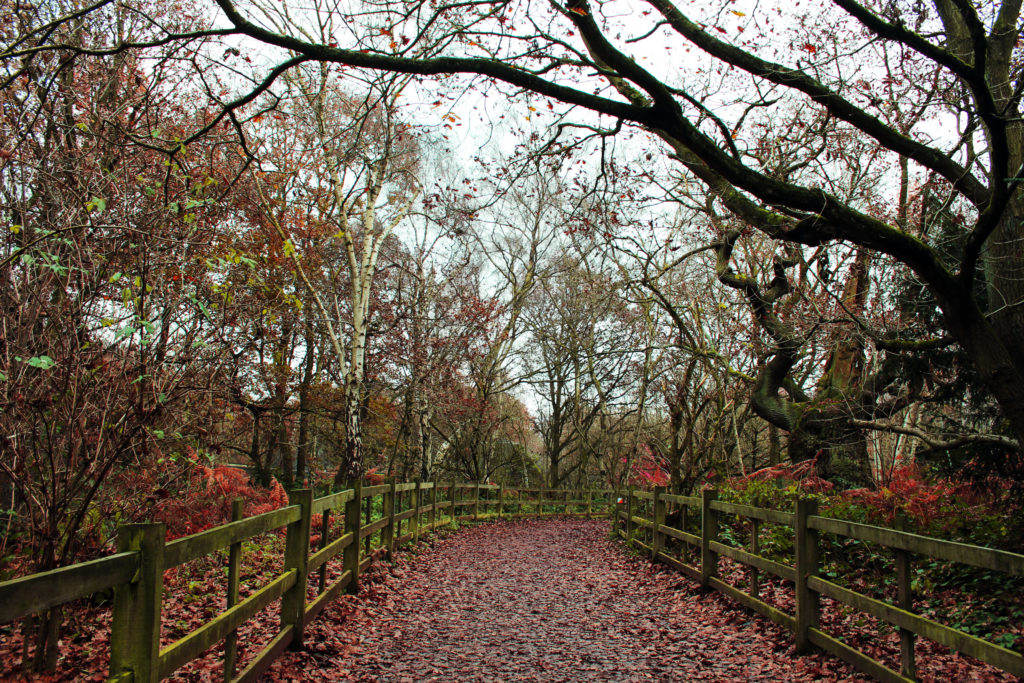 Alright, so to sum up my boring day trip in Nottingham…

Overall, I was quite disappointed with my decision to spend 2 hours travelling to Sherwood Forest and back. Considering the gloomy winter and such limited time for a day trip in Nottingham, that was apparently an unwise decision . If you also want to follow Robin Hood’s legendary trail, consider travelling here in August when the annual Robin Hood festival takes place.

Apparently, 7 hours was not enough for a day trip in Nottingham. My tip therefore would be to prioritise and plan your time carefully beforehand. For example, if you’re an avid Robin Hood fan, you should spare at least 4 hours for a proper trip to Sherwood Forest from Nottingham. Otherwise, just enjoy a leisurely walk around the city’s Old Market Square, especially when the atmosphere becomes overwhelmingly Christmassy in December.

Did you also have a day trip in Nottingham? Please share your experience in the comments below 🙂