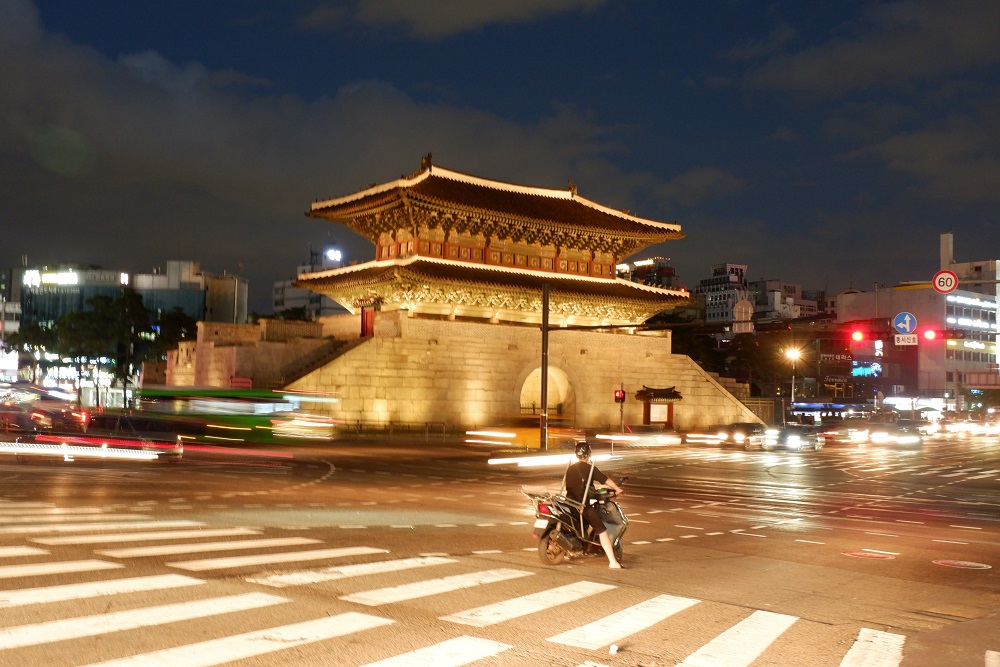 No sooner had I announced my trip to Seoul in August than my colleagues, friends and boyfriend all rolled their eyes, “Don’t go. There’s nothing cool there if you’re no KPOP fan. Save your Vietnam Dong and head to Japan instead!”

But Korea (and Seoul) was always my childhood dream. I grew up watching Korean dramas every evening after school and idolising female characters who, despite their own struggles in love and life, managed to stay positive until the very last moment. Yes, I always wanted to grow up being like them.

Unfortunately, I  stopped watching Korean dramas after middle school due to my hectic schedule. This trip to Seoul ALONE is now my perfect ticket to the past, when I was still an innocent girl dreaming about a happy ending in the land of “kimchi”.

Seoul was amazing! I stayed there for 4 days and in the end even wished the trip was one month! Perhaps the structured tours that my colleagues and friends took to Seoul exposed them to only the commercial side of the city and kept them from seeing its “soul”?

If you want to experience Seoul in a different way (perhaps more genuine and memorable), my list of 7 alternative Seoul attractions below can give you some ideas. Check them out and let me know what you think! 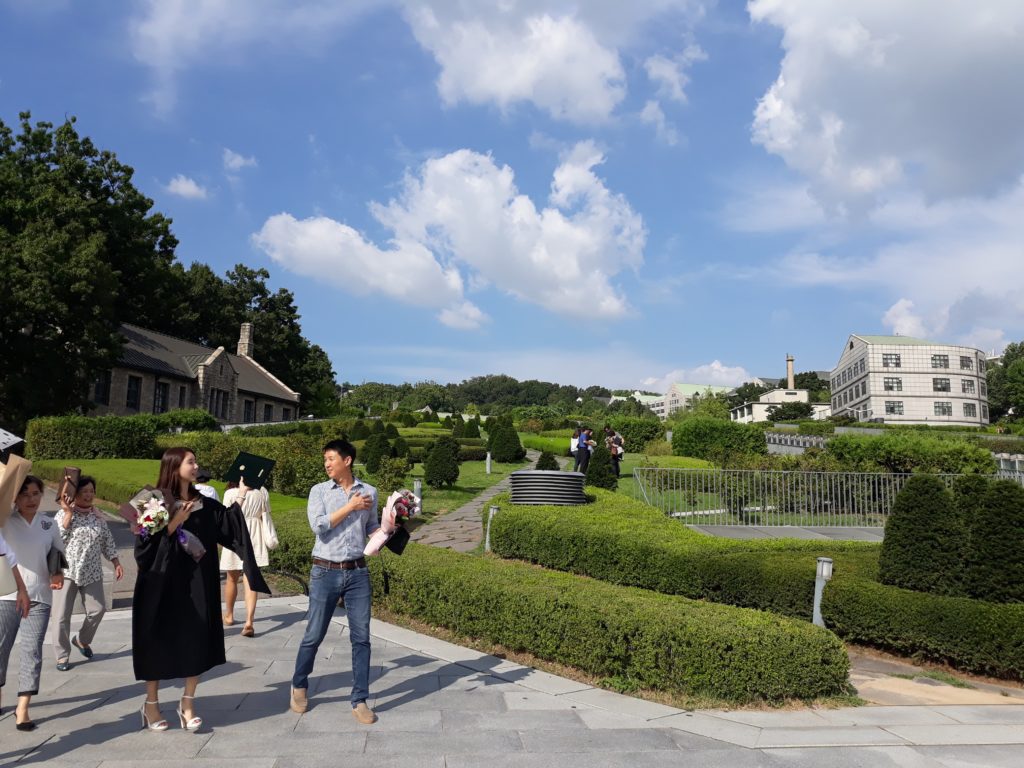 During my trip to Seoul, I was lucky to reunite with a Korean friend who attended the same university with me in Finland. As I mentioned Ewha Womans University, he comically told me that the opening gambit of students there would always be (in a posh way) “I am a woman from Ewha”.

In fact, they have all reasons to make such a noble statement. Ewha Womans University is deemed one of the most prestigious universities in Korea and also the best university for women in the country.

Perhaps you have also noticed the unusual word “womans” in its name. This is actually a deliberate choice of word, as the university wishes to highlight the uniqueness of each individual woman rather than referring to them all as “women”. “You see, the name alone is enough to urge me to apply!”, replied I to my friend.

Other than its high reputation, Ewha Womans University is also well-known for 2 other things.

The first one it its stunning architecture with buildings and spaces going up and down seamlessly. Most visitors want to take photos at the central valley of the campus, where they can also go up the visually appealing staircase to access the roofs and admire the beautiful gardens on both sides. The style can be beautifully summed up by a description quoted from its French architect Dominique Perrault, “ sometimes building, sometimes landscape, sometimes sculpture.” You have to be there, see this special piece of architecture with your own eyes and feel it with your own feet. 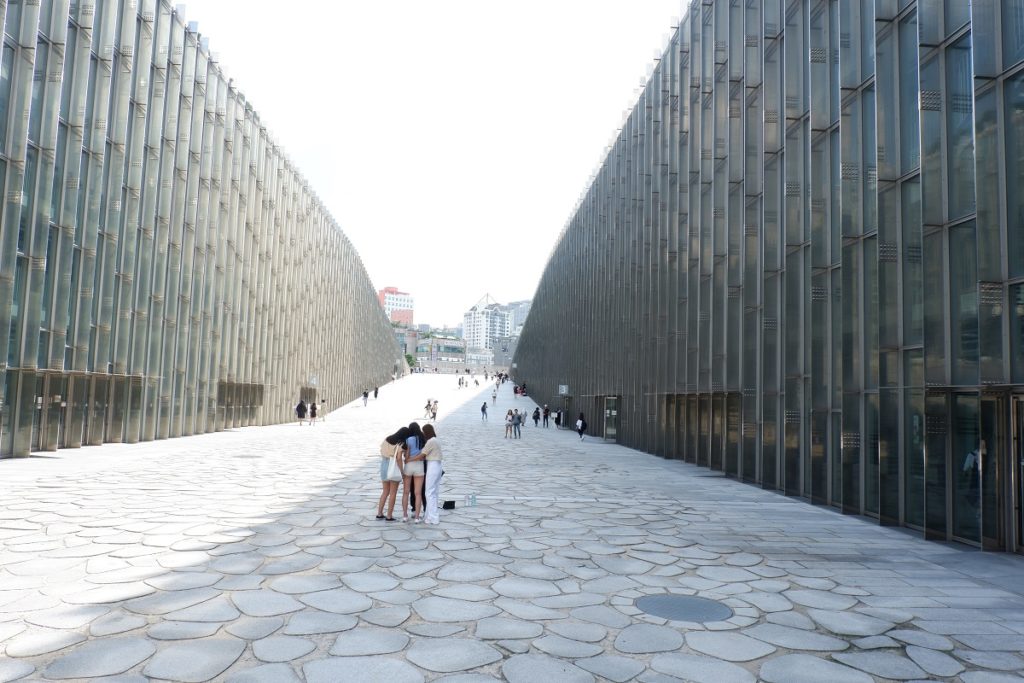 The second thing that Ewha Womans University is known for can be seen easily around the small streets leading to its campus. The area is a shopping haven for students, featuring a great selection of clothes, cosmetics,  accessories and other stuff which are often cheaper than those in Myeongdong. Why not add this to your “budget shopping list” while visiting Seoul? 😉 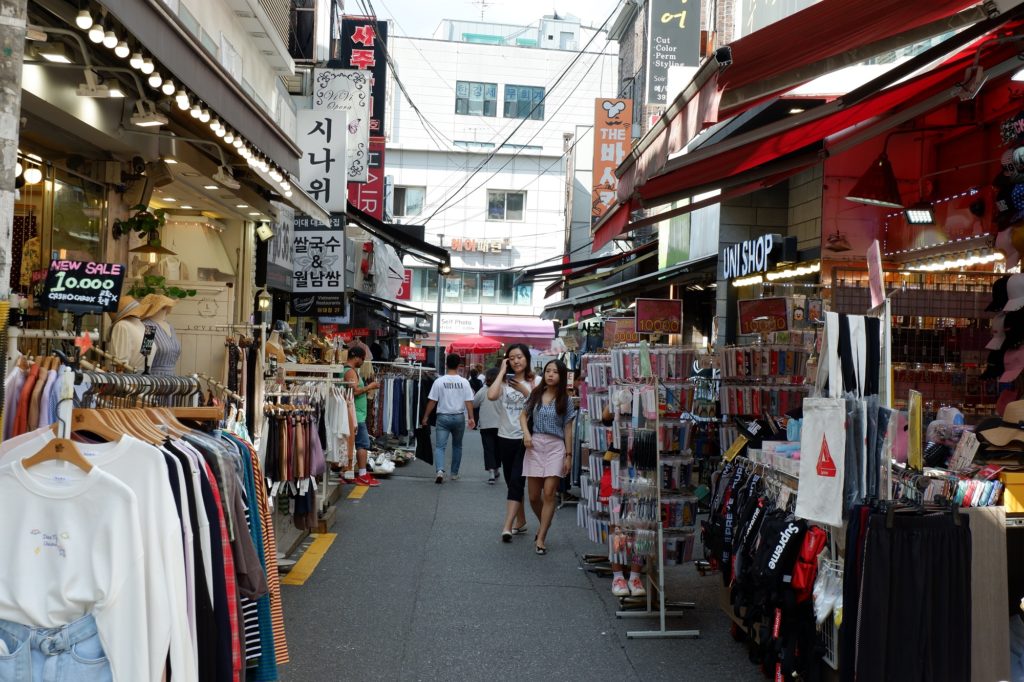 You can find here a great selection of clothes, accessories and other stuff 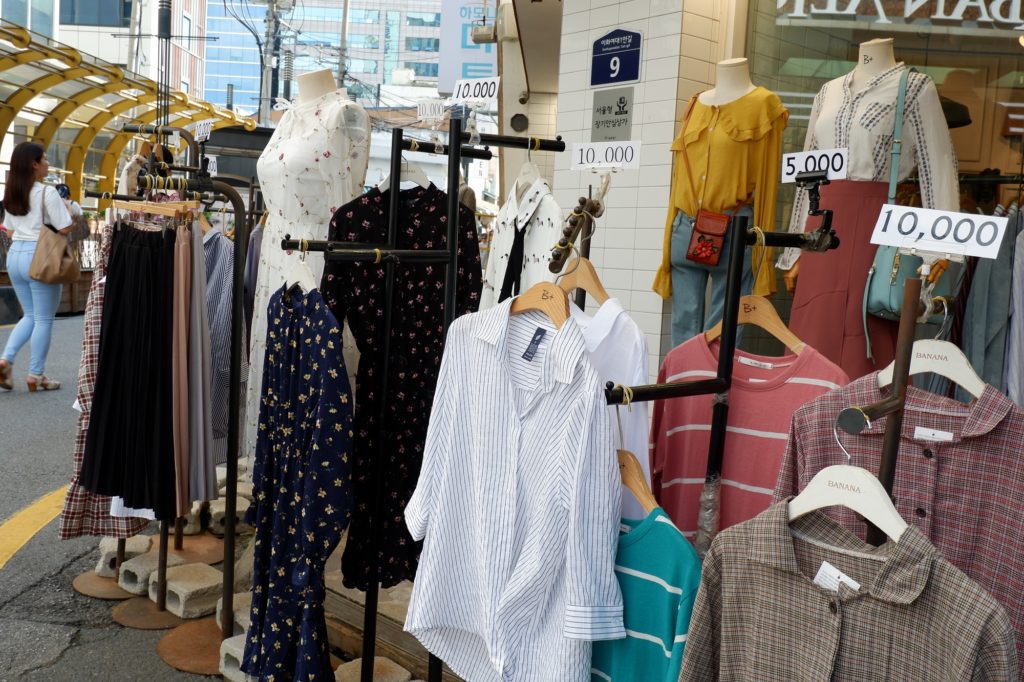 First thing first, don’t venture to Ihwa Mural Village at the end of your day as the place is situated alongside a steep hill overlooking the city. This means lots of walking and climbing, which your feet might not like.

Once a decrepit place, Ihwa Mural Village has magically turned into a little gem in the heart of Seoul thanks to a city project to reinvigorate this village with arts. Ihwa Mural Village is now an inspiring destination where people can enjoy creative artworks and take part in a variety of art-related activities. 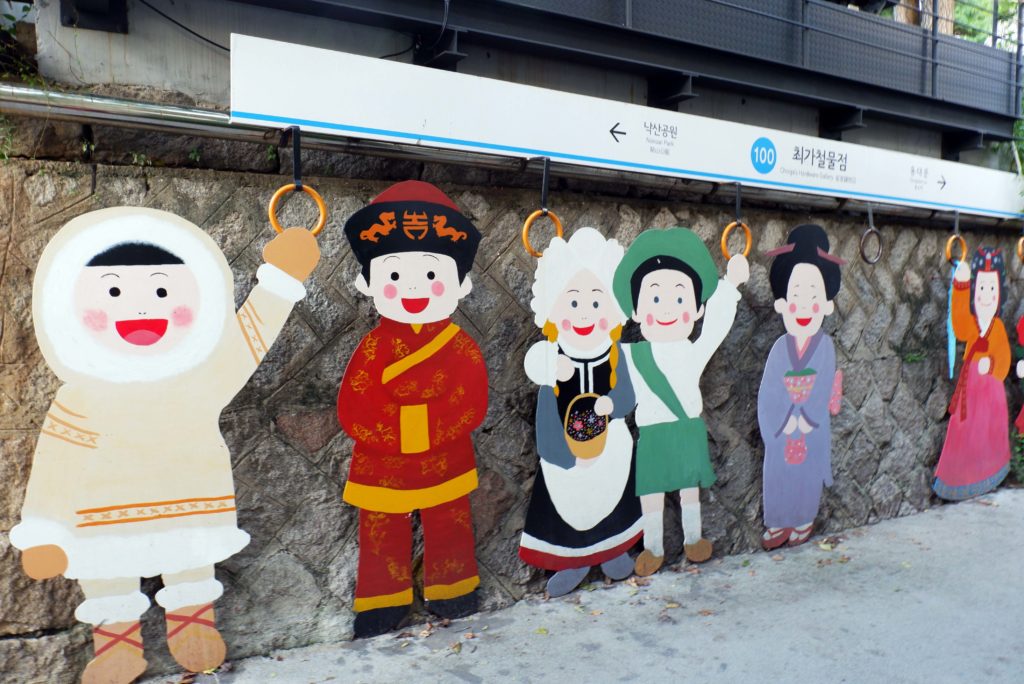 Cute figures on the streets of Ihwa Mural Village 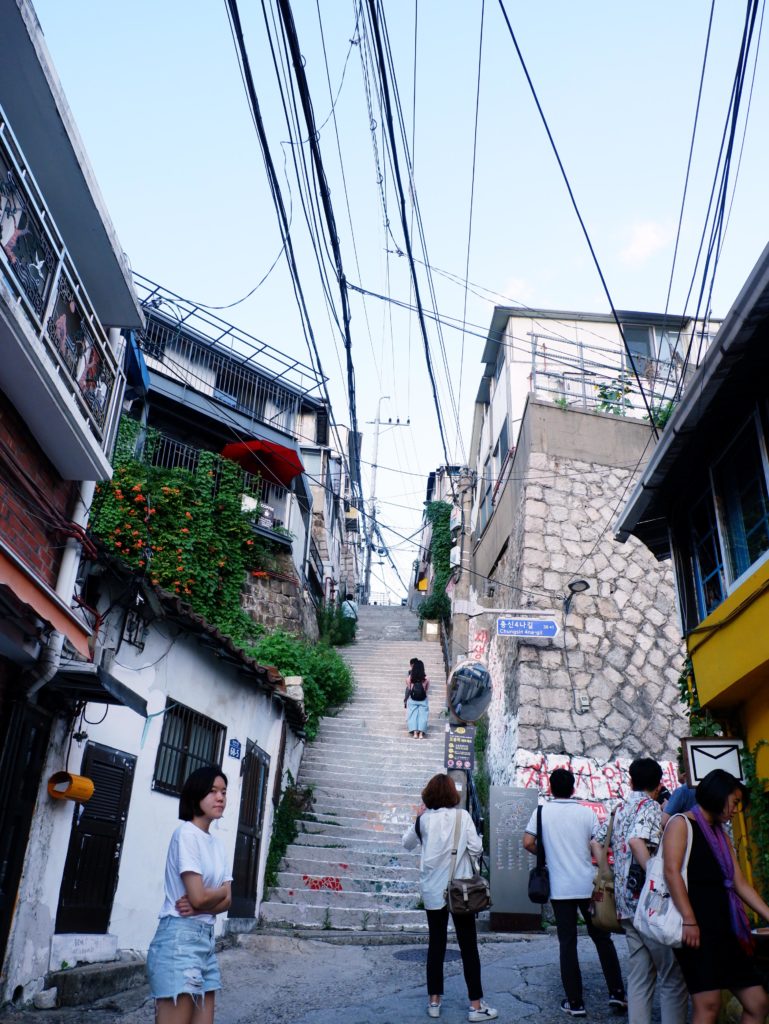 Walking up the stairs leading to Ihwa Mural Village 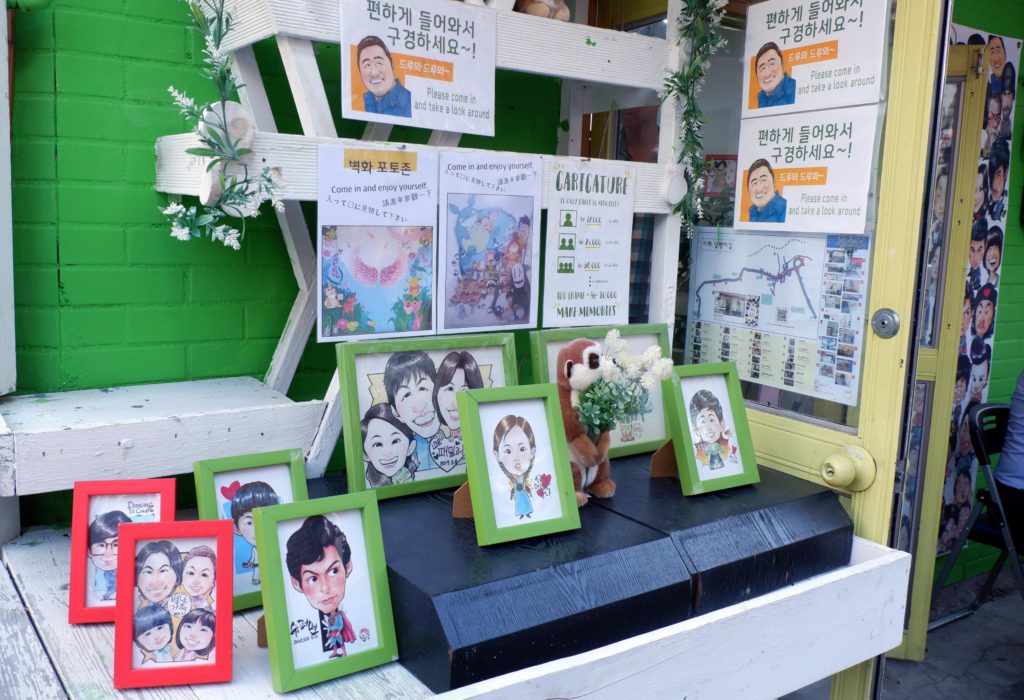 Have your caricature created at Ihwa Mural Village 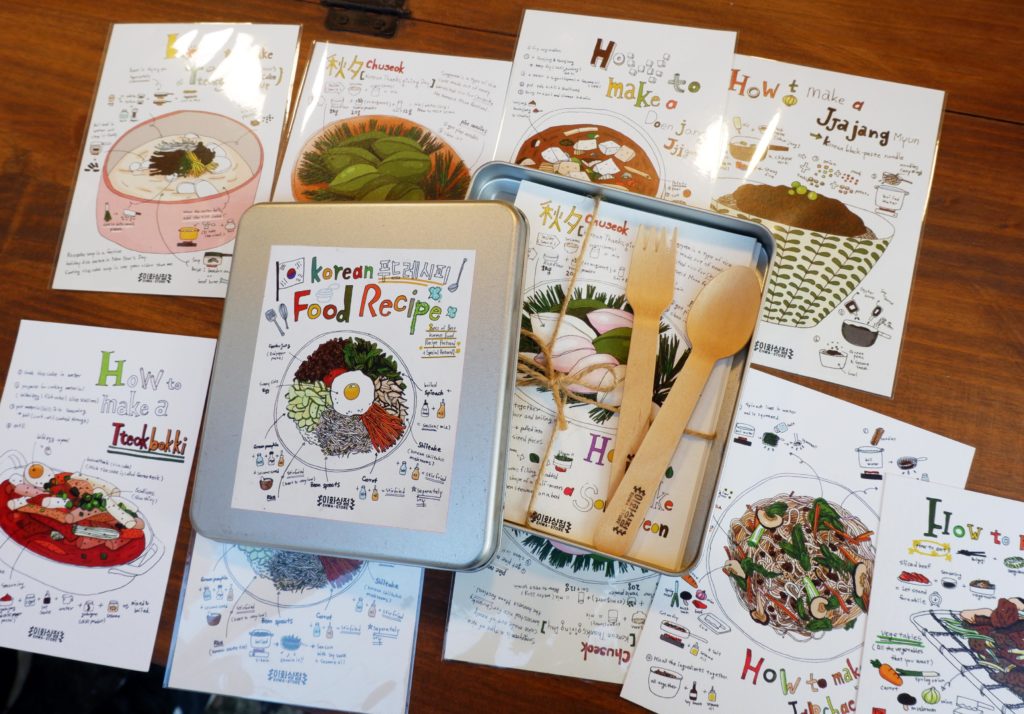 Cute postcards for those who fall in love with Korean food 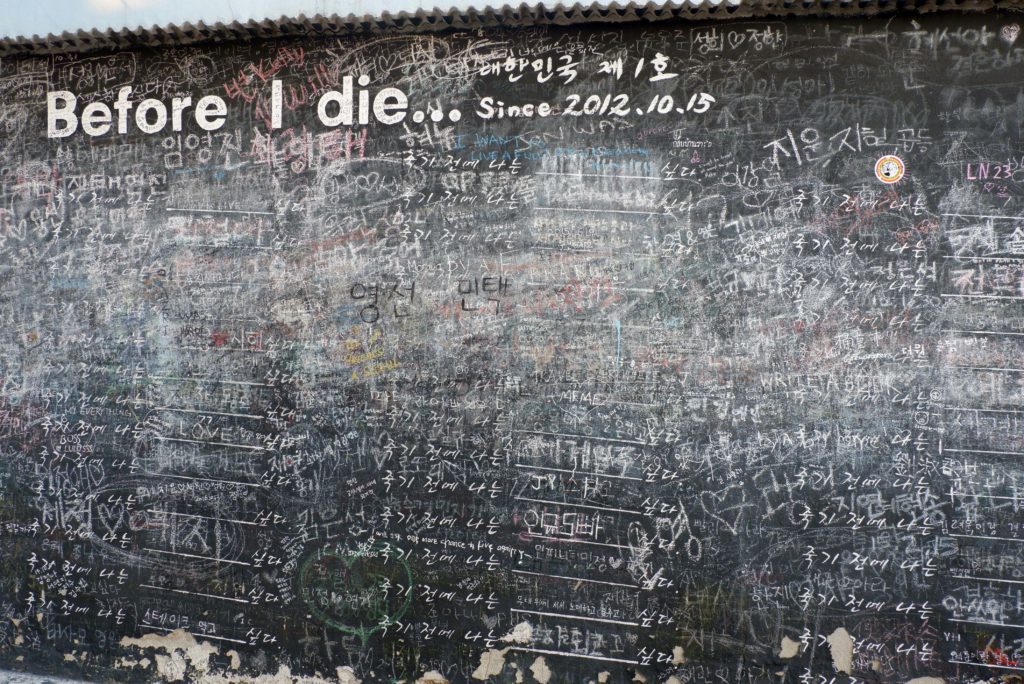 Creative murals on the walls at Ihwa Mural Village 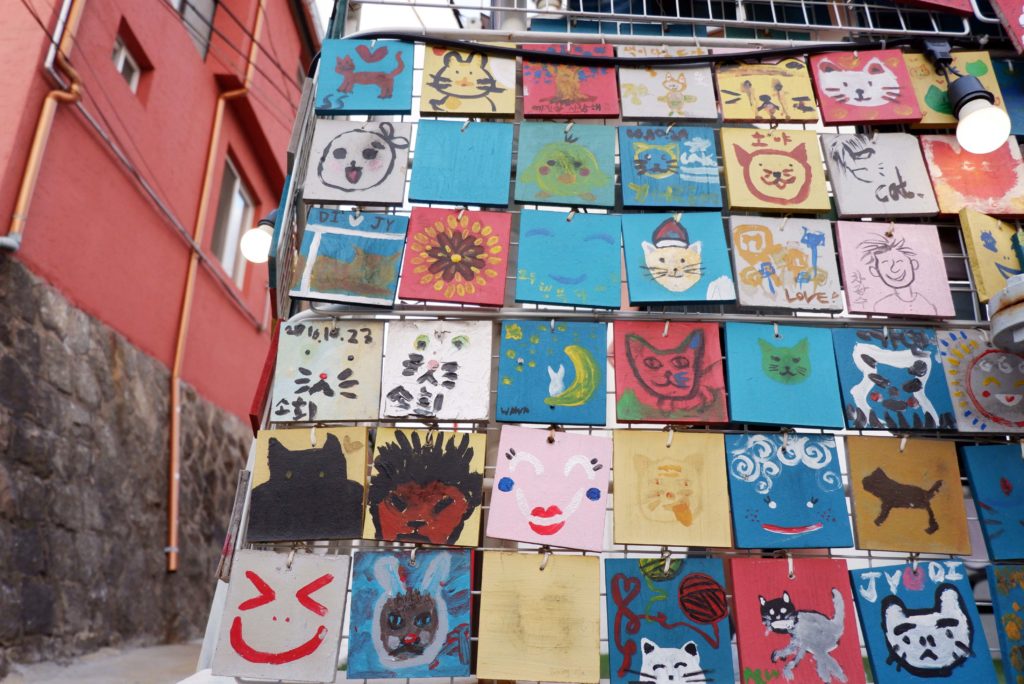 How about painting your own coasters?

The area of Jongno is rarely mentioned in Seoul’s travel guidebooks, but the feeling that this place left in me was immense! As soon as I’d stepped out of the subway at Jongno, the first thought that came to my mind was: “AM I STARING AT A BLACK-AND-WHITE MOVIE FROM THE 60S?”.

There were old people everywhere around me. Everywhere! Ladies with their shopping bags. Men with their walking sticks. Elderly beggars looking desperately at passers-by. Groups of elders in their 70s and 80s chit chatting along the pavements. Jongno was, no doubt, land of the elders. Despite being only 3 subway stops away from the bustling Myeongdong, this area seems like an absolutely different world. But how come?

With my intense curiosity, I immediately opened Ecosia* and researched more about Jongno. This article from Korea Expose offers a very good explanation as to why this area is deemed The Old Man’s Harbor. What I learned from it really blew my mind! Jongno might not seem like an exciting tourist attraction, but the area is exactly where you should head to if you want to observe locals and understand more about Korea’s modern society.

*An alternative to Google, Ecosia is a search engine that uses its ad revenue to plant trees.

Besides Jongno, there’s also another place where the ancient ambience of Seoul 50 years ago still lingers – the Seoul Folk Flea Market. I’ve always been excited about flea markets and the sense of community that they exude. They are where I head to whenever I want to get away from the tourist crowds and find out more about the cultural and social characters of a town.

Seoul Folk Flea Market is no exception. Tucked away in an alley a bit far from the city center, the market does a pretty good job of preserving the culture of the traditional Korean marketplace. You will find here clothes, fashion accessories, electronics, souvenirs and everyday items, most of which seem like they have been there for a really long time.

Antiques are what make Seoul Folk Flea Market unique. To me at least, walking pass local vendors with their melancholic faces and browsing their old-aged items was an authentic experience by itself. The place seemed to invite me on a special expedition where I simultaneously discovered their past and fathomed their presence. 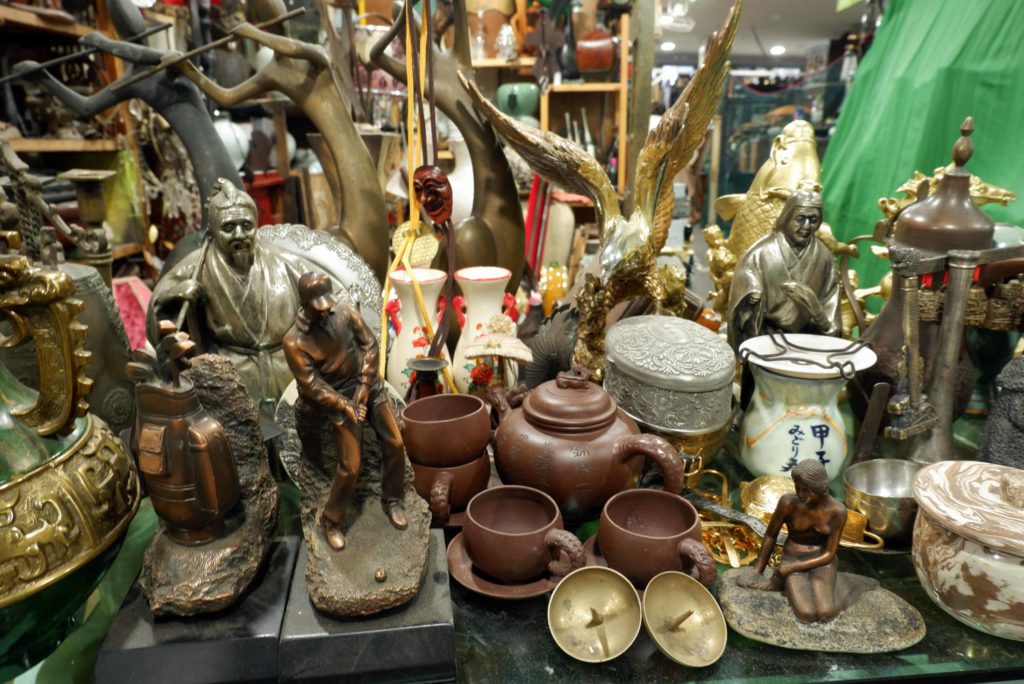 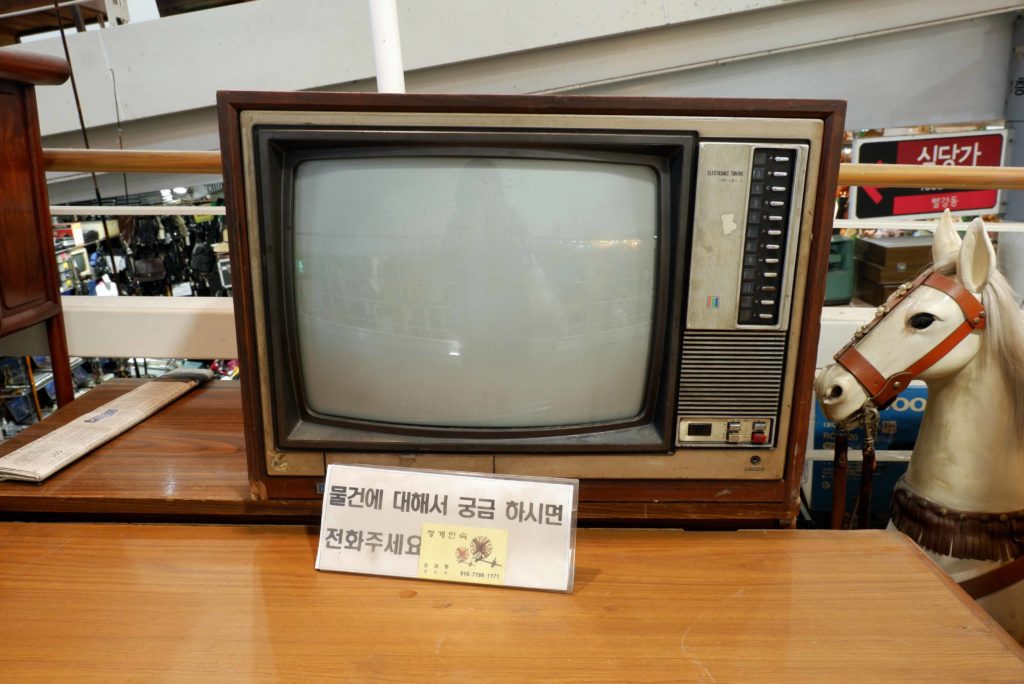 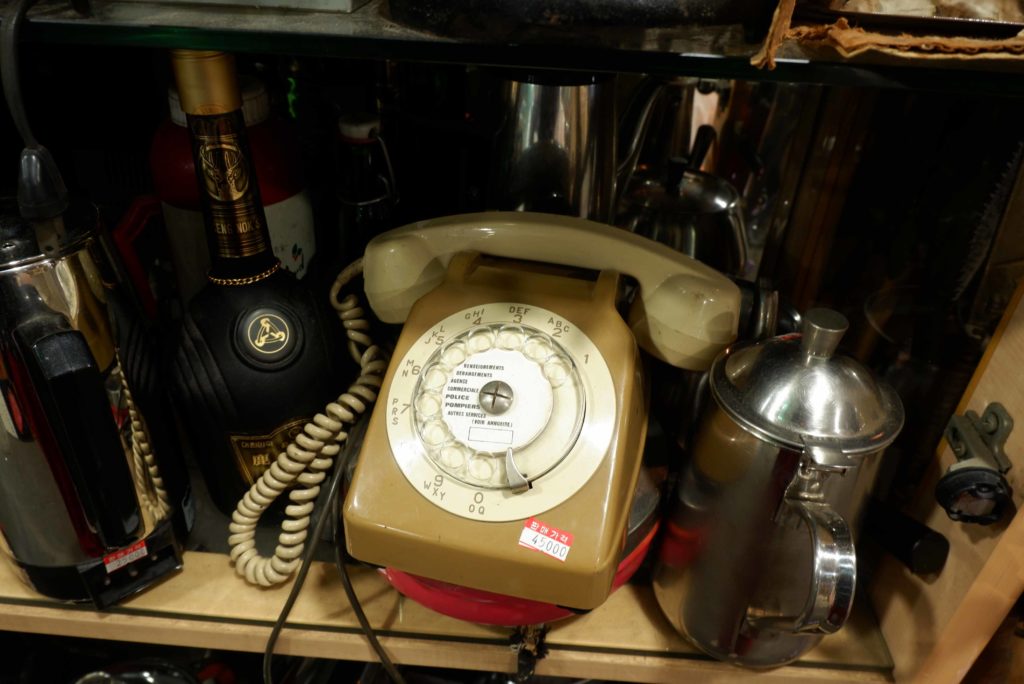 An old telephone at Antiques at Seoul Folk Flea Market 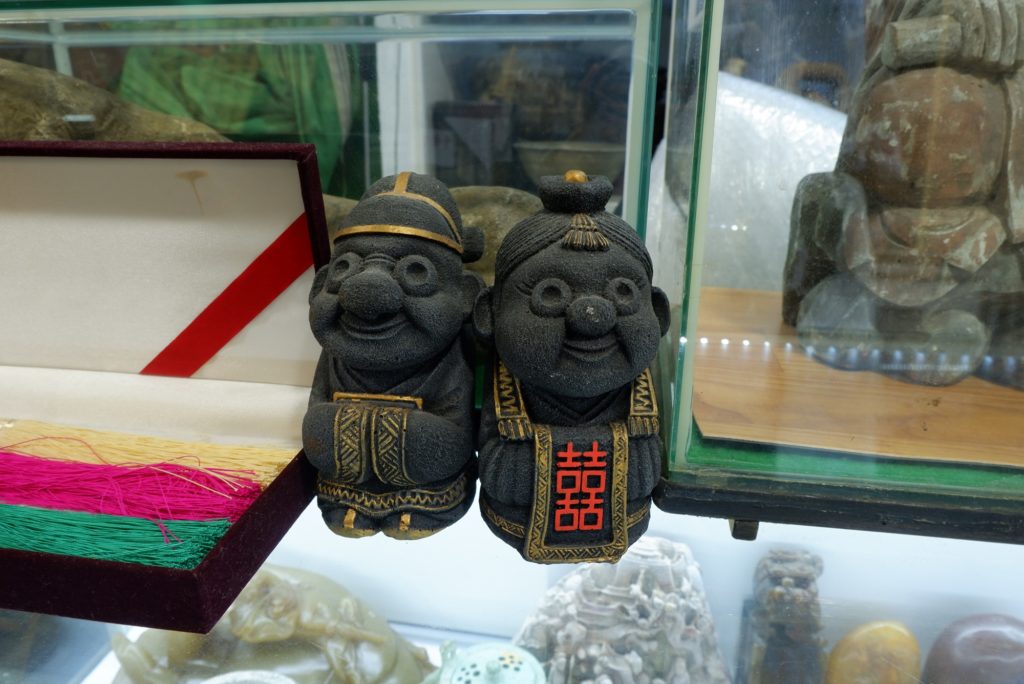 Souvenirs with an ancient touch at Seoul Folk Flea Market

5. Blend in with locals at Insadong Hanok Village

Insadong Hanok Village popped up as I was looking for a less touristy alternative to the popular Bukchon Hanok Village. These are both ancient villages with lots of alleys and traditional houses.

Insadong turned out to be no less busy on the weekend I visited. However, most of its occupants were locals rather than tourists. If you fancy browsing cute little coffee shops, tea houses, jewelry shops and makeup stores like the locals do, this place is definitely worth a visit. 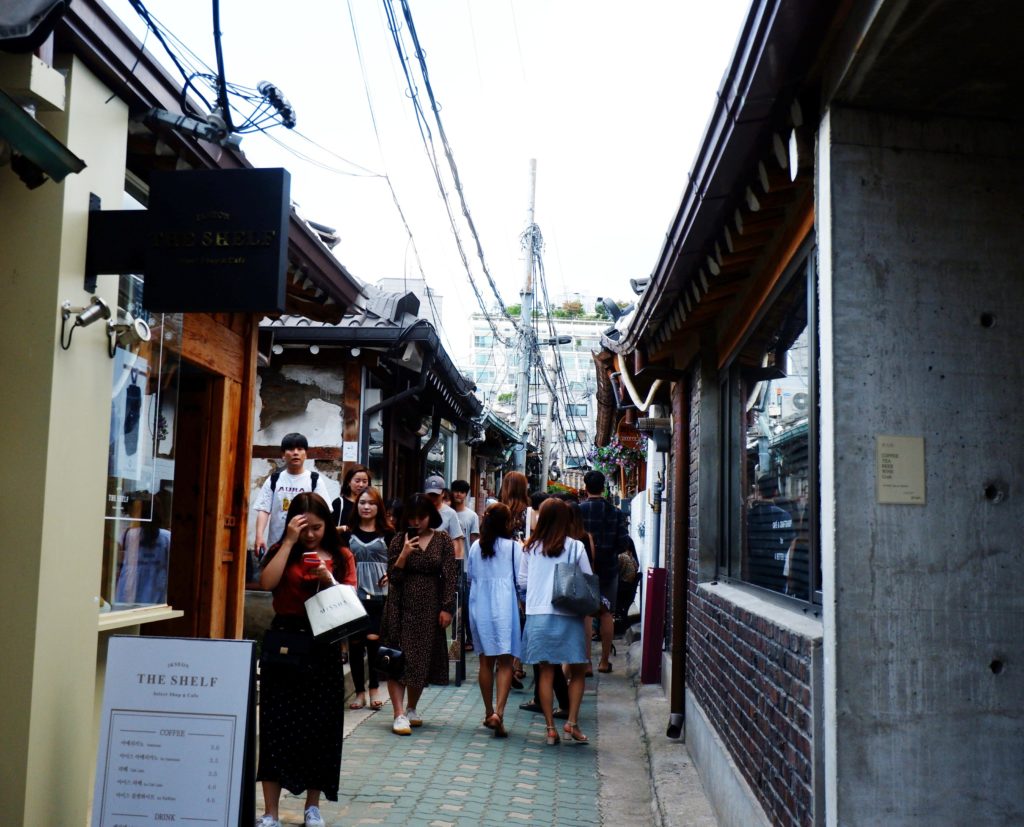 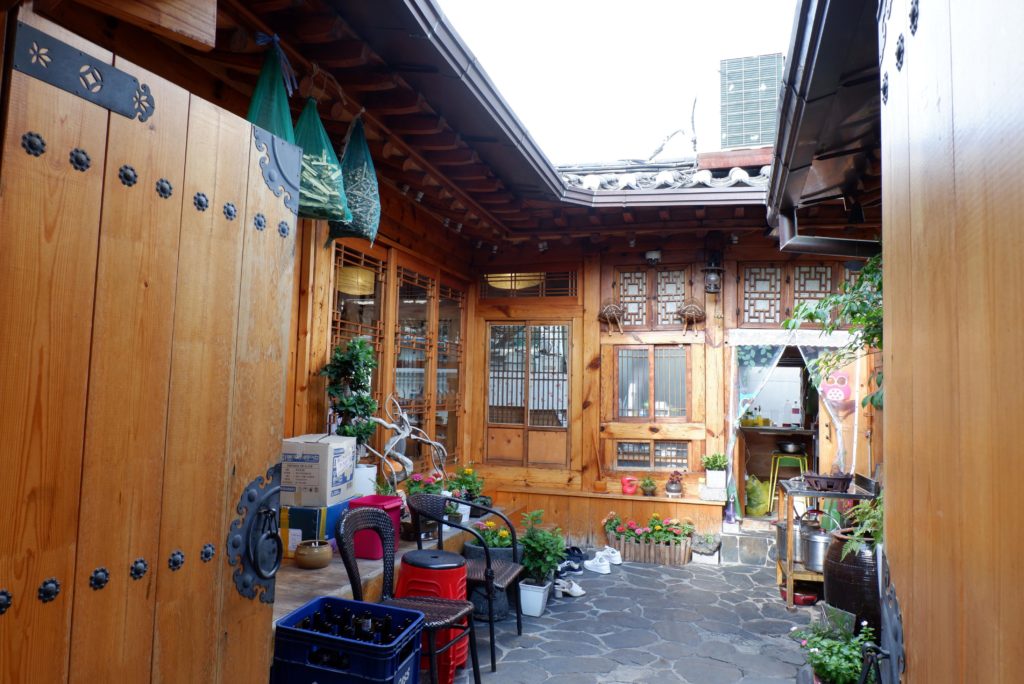 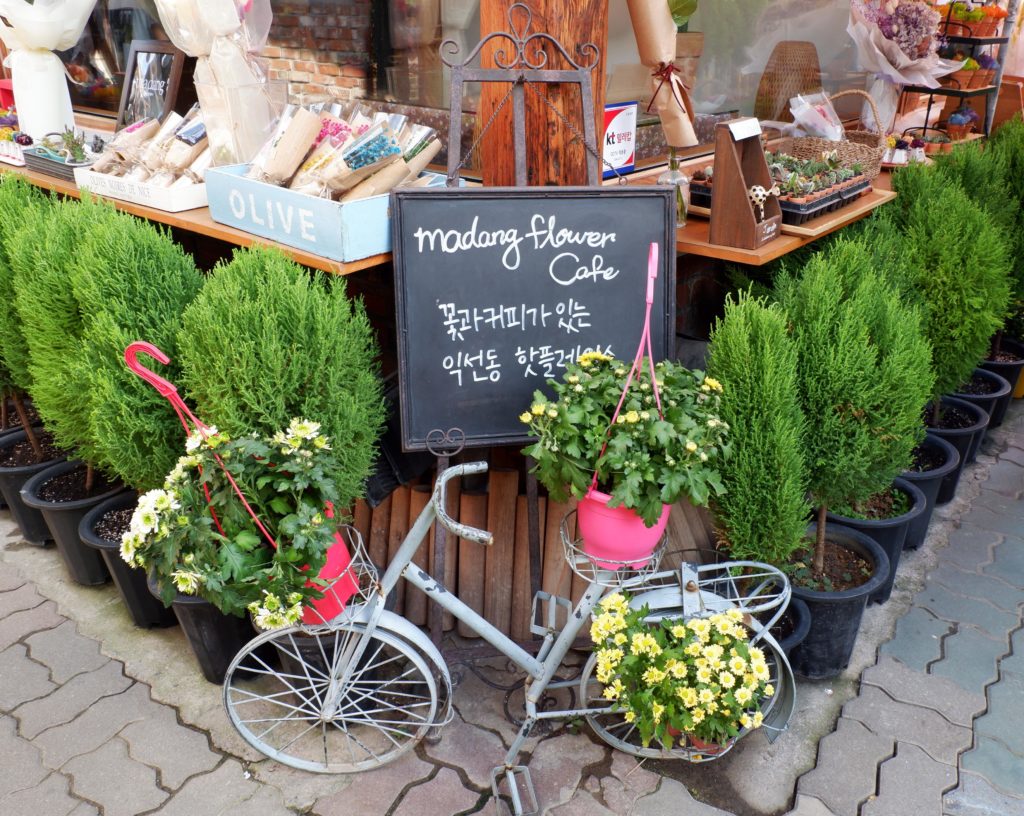 There are cute coffee shops, tea houses, jewellry shops and makeup stores all around the village 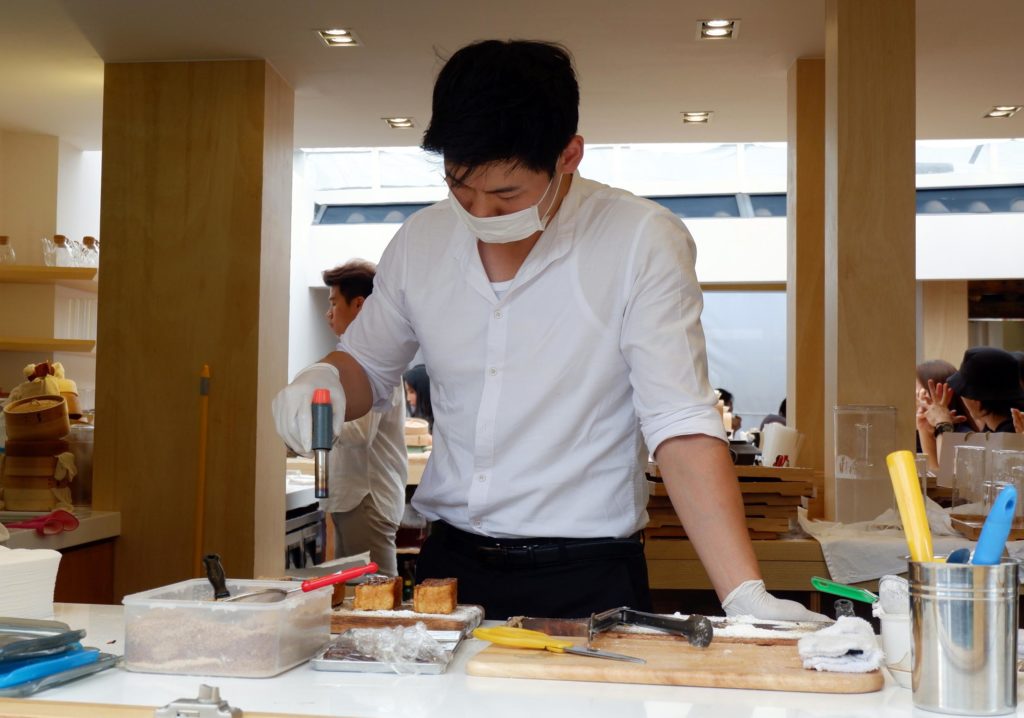 At the end of my exhausting climb up the stairs of Ihwa Mural Village, the mesmerising city view from Naksan Mountain appeared like a splash of iced-cold water amid the heat of the Sahara. 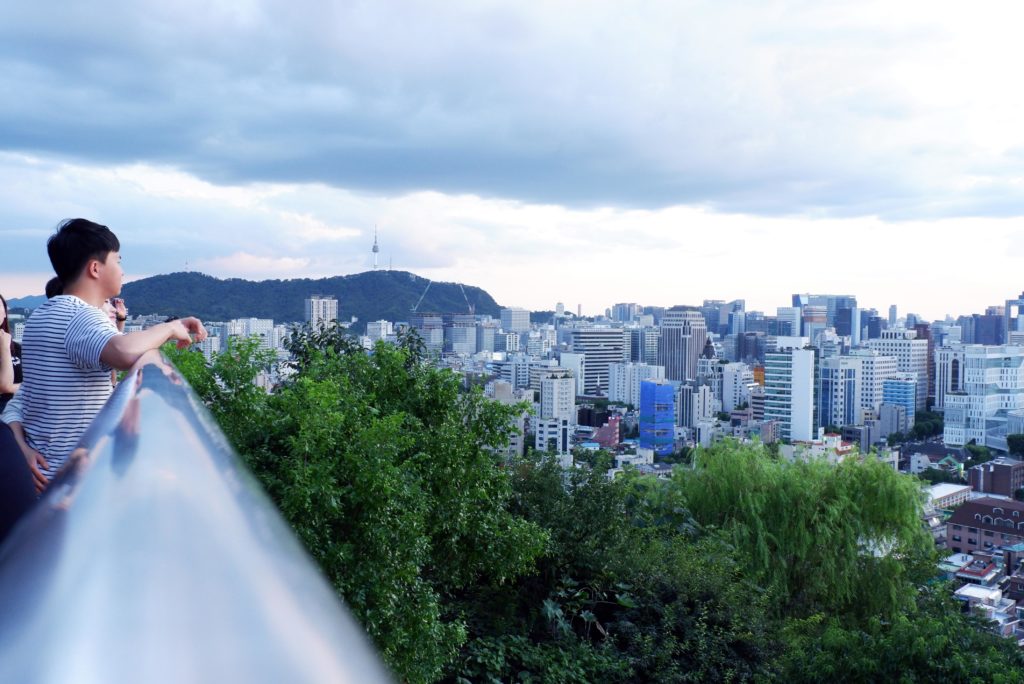 Here are some fun facts about this lovely mountain: 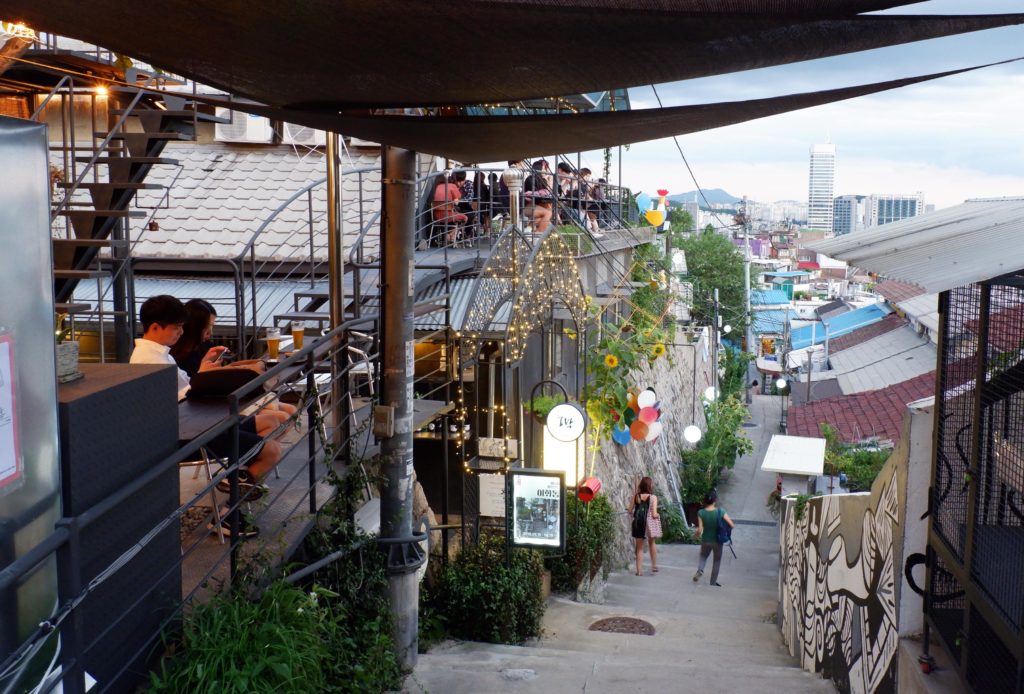 Coffee shops on the way down from Naksan Mountain

7. Get lost in a world of art at SSamzigil

SSamzigil is a special shopping center featuring all things art-related. Its 4 floors are connected via a spiralling walkway, leading through fascinating art galleries, painting workshops, souvenir shops and handicraft stores. I was wowed again and again by their dainty mini plants, ceramic souvenirs, all-natural soaps, homemade perfumes and many other interesting stuff. 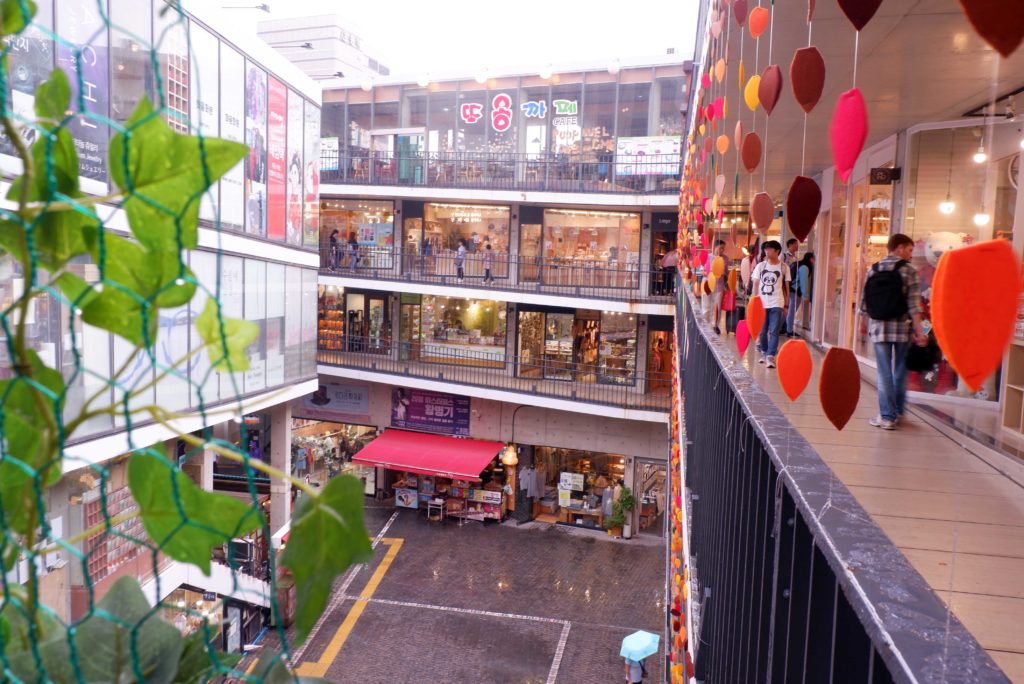 SSamgizil in Seoul is the perfect space for art lovers 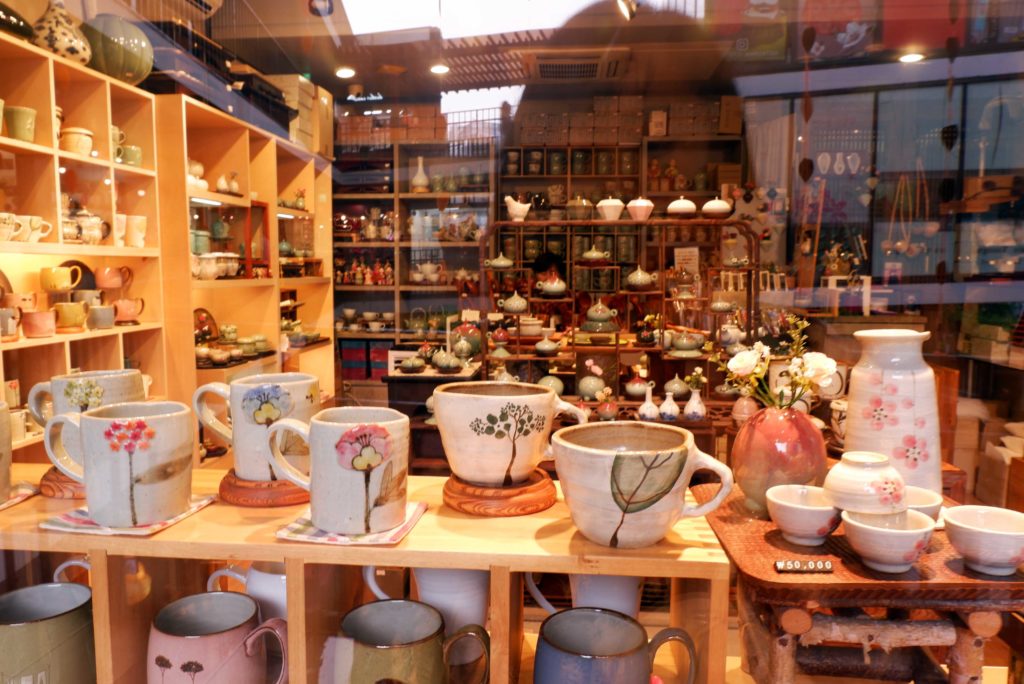 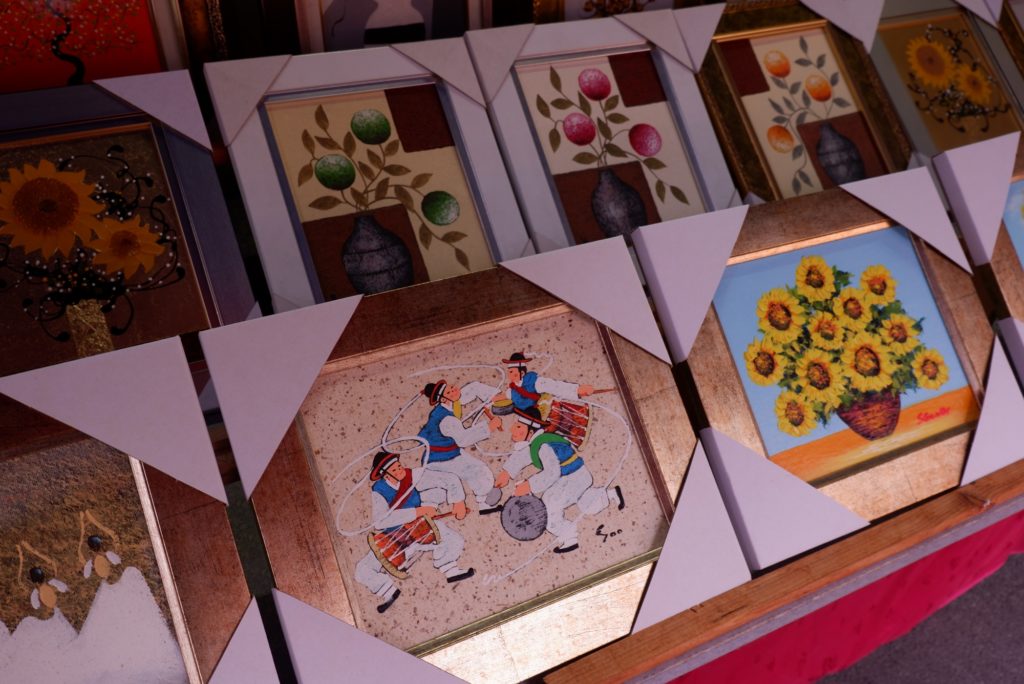 Admire pieces of arts depicting life in Korea at SSamzigil 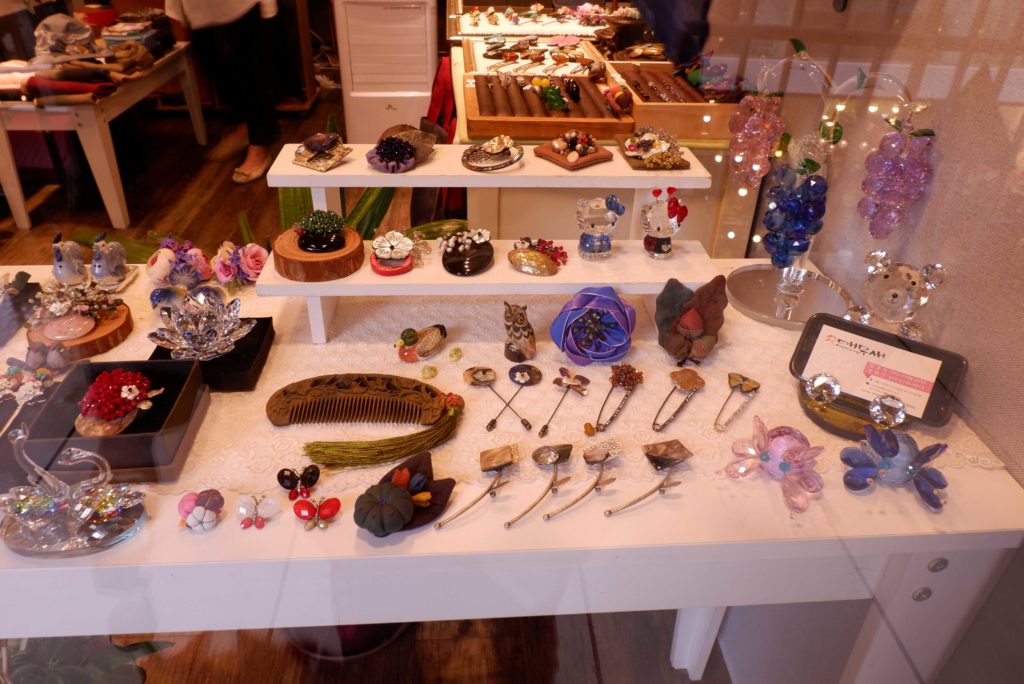 Hair pins with a lovely design at SSamzigil, Seoul

So, dear curious travelers out there, …

… what do you think of these alternative attractions?

MY BIGGEST TIP: Look away from the most popular tourist attractions in Seoul, open your curious eyes and spend some time wandering around lesser-known neighborhoods. I hope you’ll experience the subtlety of Seoul and fall in love with it in your own way 🙂

–-> Pin this for future reference: 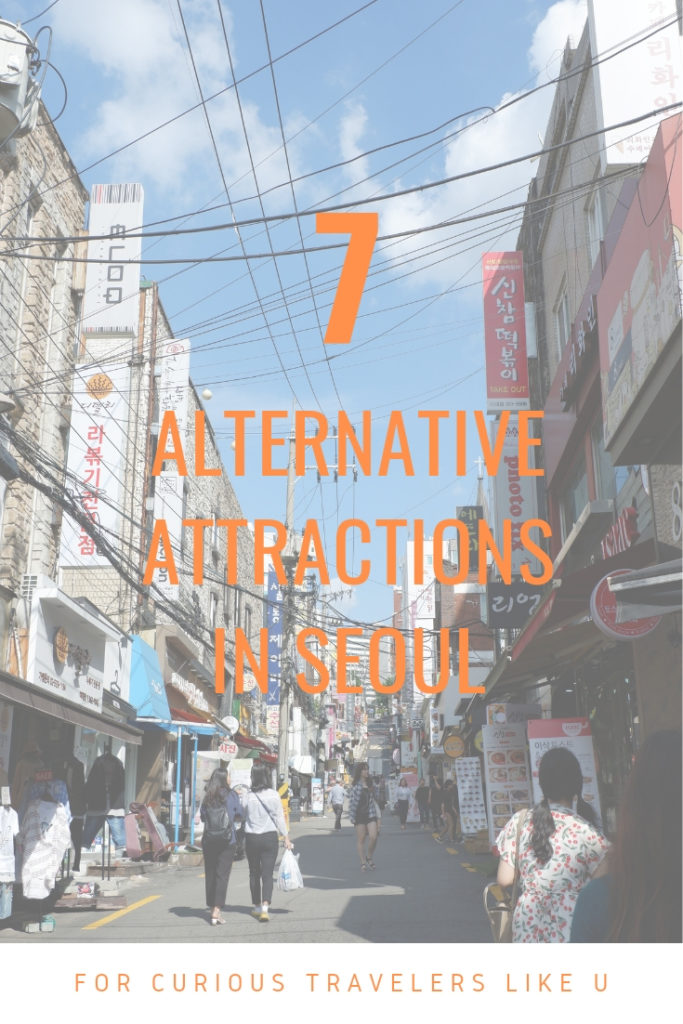 Duong Lam Ancient Village – Is it worth a visit?