I will never forget that bitterly cold morning in Ta Xua when the sun rose together with a vast sea of fluffy clouds right in front of our eyes. Ta Xua – the floating sea of clouds! After half an hour of climbing amid the freezing cold of the mountainous area, we finally found what we had been hunting for. For a moment we all turned silent, hoping fervently that the awe-inspiring sight we were beholding would last longer. Heaven never felt closer to us!

And so started our amazing Ta Xua cloud hunt journey… 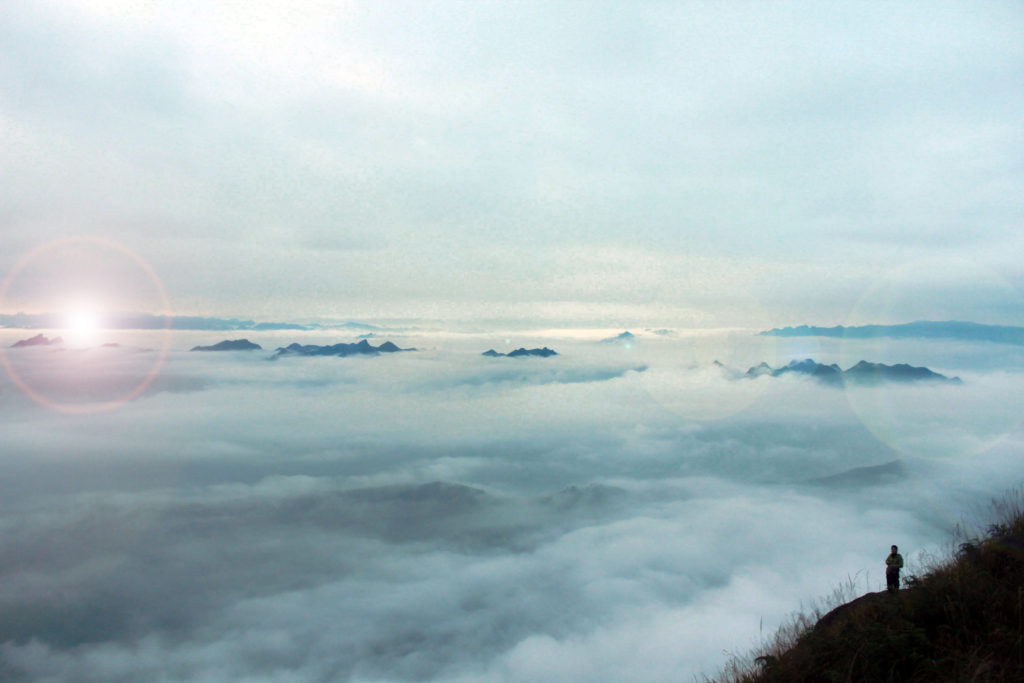 Since Ta Xua is quite a new destination for foreign travelers to Vietnam, I would like to share some of my experiences from our trip from Hanoi to Ta Xua in January 2016, including getting to Ta Xua from Hanoi, what to do around Ta Xua, accommodations in Ta Xua and the best tips for a successful cloud-hunting trip in Ta Xua.

If you need any other guidance, please feel free to email me or subscribe to my mailing list. I’ll be very glad to introduce this awesome destination to all those looking for a unique travel experience in Vietnam.

Where is Ta Xua?

Ta Xua is a range of mountains in Bac Yen District of Son La Province, located in the north of Vietnam and around 240 km from Hanoi. It forms a natural border between the two provinces Yen Bai and Son La. The highest mountain of Ta Xua is ranked the 10th highest mountain top in Vietnam, at the height of 2865 m.  Its three main mountain tops form a line which looks like the rough back of a dinosaur. Hence the place is also called “dinosaur backbone”.

Trekking here used to be a real challenge. However, the route to Ta Xua’s dinosaur backbone has become much more easily accessible recently, thanks to the construction of new routes leading quite close to one of the mountain tops. During our trip in January 2016, we only had to trek for around 2km.

Ta Xua is mostly known for a special phenomenon around its mountains: the formation of thick clouds, making us visitors feel like we are standing right in Heaven. Since some travellers came across this place several years ago, Ta Xua Cloud Hunt trips have increased in popularity. However, Ta Xua is fortunately still considered an off-the-beaten-track destination for foreign travellers to Vietnam.

How to get to Ta Xua?

By motorbike / car from hanoi to ta xua

If you’re confident with your motorbike-driving skill, you can rent a motorbike from Hanoi and ride here. From Hanoi, you can reach Ta Xua by first driving to Bac Yen (Son La Province). During our 2-day trip to Ta Xua last January, we chose to drive to Bac Yen from Hanoi. Then, we spent a night in bac Yen and departed to the mountains at 4.30am in the morning. Another option is to go straight to Ta Xua on the first day.You can then set a camp somewhere on the way to the mountain top and enjoy the sunrise the next morning. Remember to bring your own food and drinks.

by bus / coach from hanoi to ta xua

Otherwise, take a public coach from Hanoi at Yen Nghia Coach Station to Phu Yen, then to Bac Yen (Son La Province). Then book a “xe om” (motorbike taxi) for a distance of around 15 km from Bac Yen to Ta Xua. A little trekking is required if you want to climb to higher mountain tops. Note that if you travel by coach, remember to check with the driver what time the return coach will depart from Bac Yen back to Hanoi. Sometimes there’s only one coach per day and you won’t want to miss it.

Here is a list of coaches going from Bac Yen to Hanoi as found from this link. I have not verified these coach timings, so I’d strongly recommend you to call these transportation companies and double-check before your trip. (I doubt if they speak English so you might want to ask a Vietnamese to help speak to them).

So we arrived in Bac Yen at around 3pm on a cold winter day in January. Greeting us was a local young man named Long who had been educated in Hanoi before. Long’s family seemed to be the richest in town, owning a café, a karaoke bar, a mini movie room and 2 restaurants in this mountainous district. And as you could guess, those were the main activities to do in Bac Yen while we waited until the next day to hunt clouds. Bac Yen was, until January 2016, still unaffected by any tourism initiative either by the government or by the locals. Visitors to Bac Yen were mostly small groups of young and adventurous Vietnamese travelers who spent a night there to prepare for their cloud-hunting trek the next day.

Thanks to Long’s recommendation, we also found a more local-like activity to join: Hot bathtubs prepared by the H’mong.  H’mong people are an ethnic minority living mainly in the mountainous regions in North Vietnam. There was a H’mong family who organized hot bathtubs mixed with local herbs for visitors with a small fee. The hot bath came to us as a real haven from the bitter cold outside.

If you also think of spending a night in Bac Yen like we did, booking accommodations beforehand is highly recommended. Here are some local guesthouses in Bac Yen for you to consider:

Tips: I have recently received feedback from a traveller who stayed at Cloud Paradise Hostel. According to her, meals there were overpriced and tasted terrible, as least to Westerners. To be honest, Ta Xua’s tourism in general has not fully developed, which means that dining options there are more limited than in other places. Therefore, if you’re worried about the local food here, it’s perhaps better to bring along some dry food from Hanoi.

Our local guide Long, whom I mentioned above, owned a restaurant in Bac Yen called “Pho Nui”. I think the food there tasted okay though not extraordinary. It’s probably the best place to eat in Bac Yen though.

On the way from Hanoi to Ta Xua, you can drop by Xuan Son National Park in Phu Tho Province. Attractions in the park include a beautiful cave, an old bridge crossing a peaceful-flowing channel and many different types of local flora and fauna. 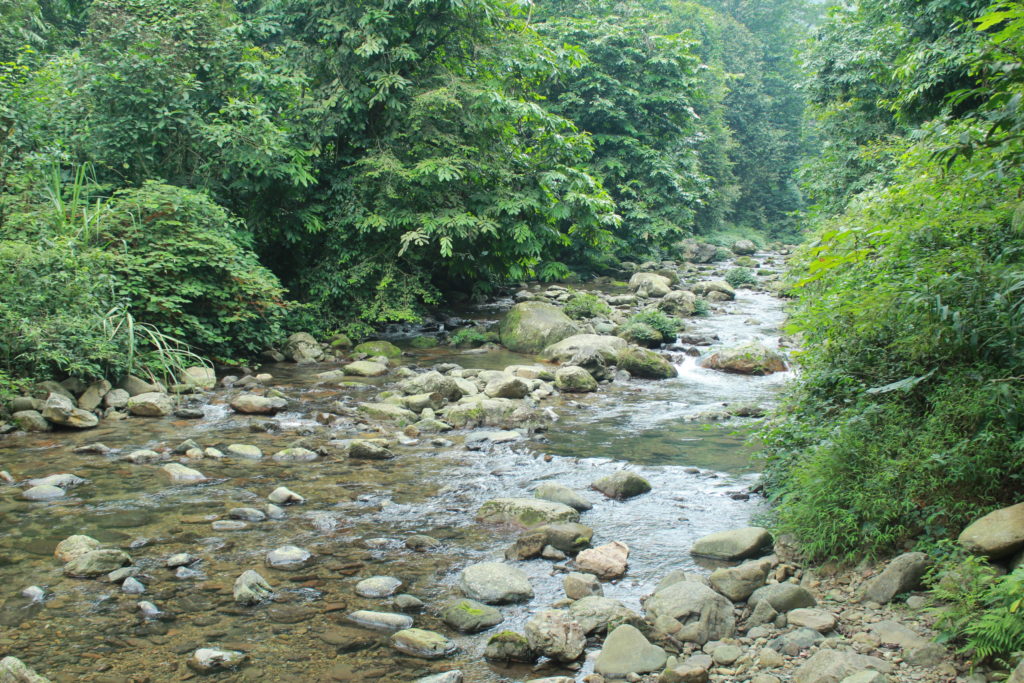 The best time to go cloud hunting in Ta Xua is from December to March. This is when the probability of catching the sea of clouds is highest.

In order to increase the probability of catching clouds, you should go cloud hunting in the early morning when the sun rises. Choose a day when temperatures are low at night and high during the day. Humidity on that day should be high while the weather is sunny.

The whole trip can last for 2 days with one night spent either in Bac Yen or in Ta Xua. Another option is to visit Moc Chau – a beautiful city in Son La with flower festivals and tea hills. If Moc Chau is included in your itinerary, your trip will be expended to 3 days.

So to top it off…

It was quite fortunate for us not only to hunt clouds successfully, but also to welcome the year 2016 by beholding sunrise above this amazing sea of clouds (Our trip was made on the 1st of January, 2016).

If you are looking for a unique travel experience during your trip to Vietnam, a journey to hunt clouds in Ta Xua is definitely what you should be after.

–> Pin it for future reference: 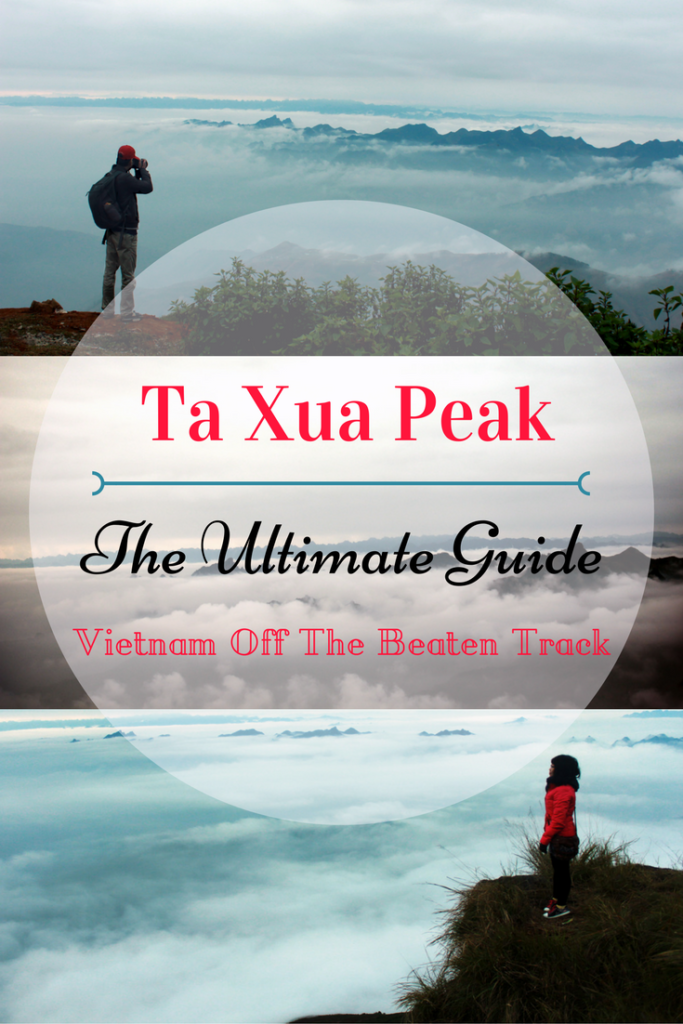