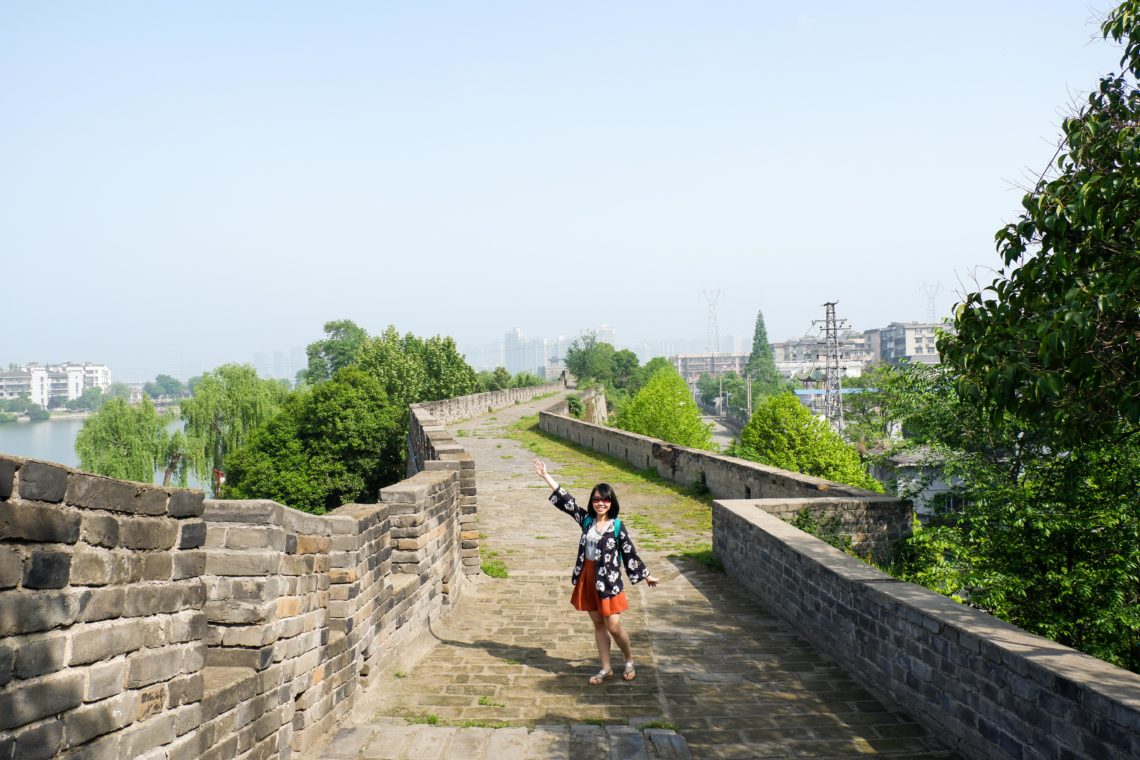 During our 10-day trip to China last April – May, we luckily managed to squeeze 12 hours of exploring Xiangyang into our already tight itinerary. Since our time there was limited, we decided to only visit the one attraction that both of us had known and yearned to see since we were teenagers: The Xiangyang Ancient City Wall.

If you’re also living in Hubei province or planning to visit destinations around this area, do consider dropping by Xiangyang and admire its remarkable city wall. With its historical importance and unique location, from where you can admire mesmerizing views of the city, Xiangyang Ancient City Wall is definitely worth a visit!

How to get to Xiangyang Ancient City Wall?

The second-largest city by population in Hubei province, China, Xiangyang is also known for its crucial role in Chinese history. With the Han River crossing by and dividing the city into the north part and the south part, Xiangyang and especially its critical city wall witnessed a number of major battles between the Han Dynasty and others, including the infamous Mongol empire.

With convenient transportation links to other cities in China, Xiangyang can be reached easily via bus, train ( Xiangyang Railway Station) and airplane ( Xiangyang Liuji Airport ).

During our trip, we arrived in Xiangyang after a 2-hour train journey from Wudangshan. From the railway station, it takes around 20 minutes to travel by car to the City Wall.

Where to stay in Xiangyang

There are hotels and restaurants galore around Xiangyang Railway Station.

We chose to stay at Vienna International Hotel Xiangyang Railway Station, which is located only a kilometer away from the railway station. Our room was clean and spacious, while at the same time also boasting two super comfortable foam pillows for us to rest after a tiring day.

What to do at Xiangyang Ancient City Wall

You can still experience the bustling atmosphere of old Xiangyang today by visiting all those shops and eateries inside the wall. The area is super popular with locals in the evening and on the weekend. Why not join them and just have fun?

After buying an entrance ticket for 10 CNY, you can start walking on the wall and capturing great views of Xiangyang city.

You will see a green park where old people practice taichi and small children play hide and seek, busy streets on which locals run their daily routines, as well as the lovely river that has nourished life in this town for centuries. It was such a peaceful stroll along the ancient wall!

To top it off…

Once considered as a pivotal protector of the city, this revered City Wall still appears fearsome and imposing the in midst of Xiangyang nowadays.

Should you visit Xiangyang Ancient City Wall during your trip to China? I’d say yes, definitely! If you have any questions about visiting Xiangyang, don’t hesitate to comment below. I hope you’ll enjoy this trip as much as we did!

For information about destinations near Xiangyang, don’t forget to read my post about Wuhan (coming soon) and Wudangshan.

Disclaimer: This post contains some affiliate links which DO NOT COST YOU EXTRA when you make purchases via them.

5 tips to enjoy Hoi An at its best | From someone who’s been here thrice!