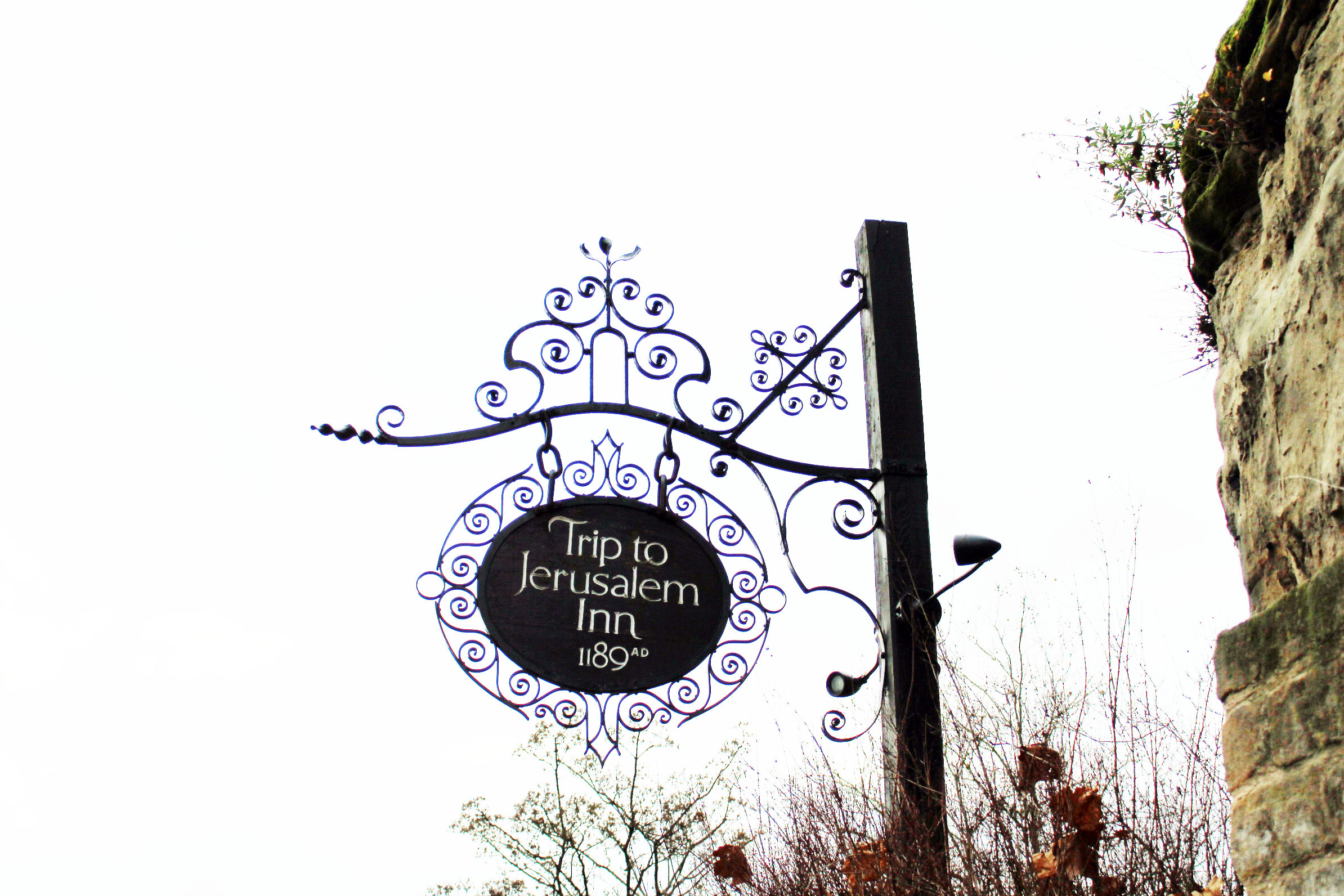 What will you do if you get to visit Nottingham in December for one day? Is one day enough to check out the city’s most popular attractions?

As my trip began, I arrived in Nottingham on an unexpectedly freezing Saturday morning. It’s the middle of December with dark skies, a damp chill in the air, and a widespread lethargic atmosphere. Picking up a local map at the bus station, I started navigating my way out to explore the city.

Read on to find out what it’s like to visit Nottingham in December, how to design a one day itinerary that covers the most popular attractions, and what Robin Hood has to do with this city.

It was an easy 10-minute walk for me from Broadmarsh bus station to the first popular attraction in Nottingham – Ye Olde Trip to Jerusalem, which is claimed to be the oldest pub in England. Dated back to 1189 AD, the pub is said to be connected to the caves of Castle Rock as a brewhouse to Nottingham Castle in the old days.

Arriving at Ye Olde Trip to Jerusalem at around 10.30 AM, I sadly did not have the chance to venture inside as the pub would open from 11. Nonetheless, I could feel its ancient ambiance already from the outside.

Right next to Ye Olde Trip to Jerusalem lies the imposing Nottingham Castle. This outstanding castle as we see nowadays is actually a rebuild of the original mansion which was destroyed in the early 19th century.

The Nottingham Castle now hosts a museum, an art gallery, and also a cave tour for curious tourists from around the world. The entrance fee is £7 for adults and £5 concession.

Situated right beside Castle Rock is a must-see for all visitors to Nottingham: the Statue of Robin Hood aiming his arrow! Robin Hood as depicted by the statue looked strong and powerful with sharp and focused eyes. Although there have been inconsistent opinions about Robin Hood’s characteristics, the statue surely gives us the impression of a forceful, tough, and strong-willed figure.

The legend of Robin Hood

Robin Hood’s legend is directly connected with the Nottinghamshire region. This is why Robin Hood is regarded as one of Nottingham city’s symbols nowadays.

According to the legend, Robin Hood was an outlaw who robbed the rich and provided for the poor in the late medieval period. In contrast, the major villain who encountered Robin Hood and challenged his outlaw status was the Sheriff of Nottingham. Robin Hood’s exceptional archery and swordsmanship were notable skills that accompanied his status of “hero” as regarded by many.

From the Robin Hood Statue, I walked for 10 more minutes to the Old Market Square, where a bustling Christmas market took place.

The atmosphere was overwhelmingly Christmassy with a carol, an outdoor skating rink, and a glittering merry-go-round full of smiley children. Stalls at the Christmas market offered a wide variety of mouth-watering food ranging from berry-sourced burgers to chocolate-mixed fruits. I found a Finnish stall offering traditional Finnish food such as dried berries, meatballs, and cinnamon buns as well. Amazing!

Besides, you will find the Tourist Centre right in this Old Market Square. Feel free to drop by to pick up a map or ask for useful travel advice.

After roaming around the Christmas market, I rushed to Victoria Bus Station to catch the bus to Sherwood Forest, where Robin Hood and his merry men once dwelt and robbed passers-by.

How to get to Sherwood Forest

If you visit Nottingham in December, the sun sets already from 4 PM. Therefore, it’s better to schedule a morning visit here as it’s not a good idea to venture into the forest when it’s already dark.

What to see in Sherwood Forest

The forest itself appeared quite sacred, especially during this wintertime. Dozens of oaks dating back hundreds of years stood strong like soldiers guarding the old spirits of the forest. It takes roughly 20-30 minutes to walk to the Major Oak where Robin Hood hid while dwelling here.

Besides, I would also recommend watching the 15-minute informative documentary about Robin Hood and Sherwood Forest in the Visitor Centre.

Whether or not you believe in the Robin Hood legend, these oaks can tell you the truth. Because after all this time, they have borne witness to even the smallest secrets in this forest. In addition to its historical value, the Sherwood Forest is also a great place to explore for those interested in biology and geography.

For those seeking a more active visit, Sherwood Forest is also an ideal place for trekking, cycling, and horse riding. There are also lots of interesting events and festivals taking place all year round.

Facilities around Sherwood Forest include a small restaurant and a souvenir shop. You can also walk to Robin Hood’s Village Edwinstowe nearby. Here you can see the church where Robin Hood married his sweetheart Maid Marion.

Sum up: My one day trip to Nottingham in December

Overall, visiting Nottingham in December allowed me to enjoy the city’s cozy Christmas atmosphere while avoiding tourist crowds. However, one day in Nottingham was definitely not enough for me, since I would love to spend more time in Sherwood Forest to follow Robin Hood’s trail and explore other attractions in this city as well.

Have you visited Nottingham in December before? Please share your experience in the comments below 🙂